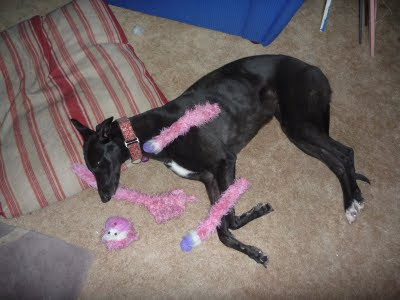 A lot of my regular readers will remember this post, where you were all introduced to this charming pink monkey. The monkey came to an agonising death last night - torn limb from limb.

Of course, Barbie was not the culprit. It was in fact N & Bender whose spirited game of tug of war resulted in monkey's grisly end.

Unfortunately Bender refused to pose with the pieces - instead he grabbed the monkey's head and threw it at me like a ball - somewhat macabre, I think.

So this leads me to a question - does anyone know of a 'tougher' stuffie which I can order online? I have heard of a tough dragon stuffie, but I cannot seem to get it into Australia. The problem is that Barbie will only play with stuffies, but if Bender gets hold of them, well, you can see what happens.
Posted by jet at 8:01 AM