Wordless Wednesday - Greyhounds can sit, and they will! 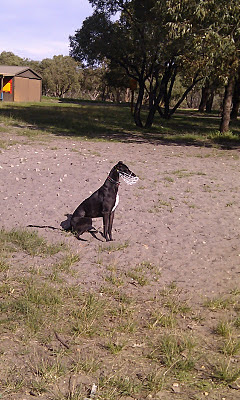 Mittens is actually my very own first kitten (as an adult). We had kittens when I was growing up but that seemed such a long time ago. We were in for a treat with Mittens - she was always up for a game! When she first came into the house, the yellow cat in the video was smaller than her. I had won it out of a skilltester machine to give to N as a present. Mittens decided she liked it though, and as soon as she grew bigger than it, I think she wanted to teach it a lesson.

Email ThisBlogThis!Share to TwitterShare to FacebookShare to Pinterest
Labels: mittens

Busy time of year gets busier

His anti-anxiety meds are not making him sleepy any more and they seem to have a calming effect on him, his on-leash reactivity seems to be getting better - though he is still pretty sensitive to loud banging sounds. He does seem to recover better from a freak-out though, so it must be making some difference.

Barbie is feeling the heat - we are going to buy a fan on Saturday so that we can direct it at her crate at night. I don't need the ceiling fans swooshing around at top speed but Barbie needs some extra cooling. She kept me awake with her panting last night!

With the change in the weather everyone is shedding like crazy and the house is full of drifts of hair. Barbie is shedding heavily because she had that mad-thick winter coat after her winter in the kennels when we were away in Europe. Bald thighs, belly and neck will be making a comeback for summer! Froufrou has a pretty thick coat as well and that comes off whenever you pat her. Mittens, who is long haired, but has a finer coat than Frou, doesn't seem to be losing much fur at all - but she does groom more than Frou, so maybe there are some kitty hair-balls in our future :P
Posted by jet at 2:00 PM
Busy time of year gets busier
2011-11-25T14:00:00+08:00
jet
barbie - heat tolerance|bender - ear infection|bender - phobias|
Comments 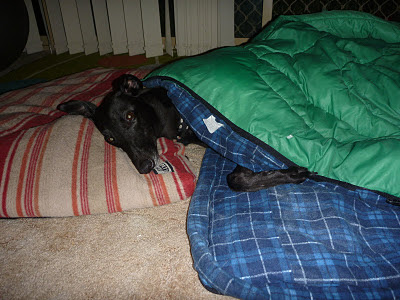 There is a lady who lives nearby who has two little brown Italian Greyhounds, or iggies. I have seen them around, and N has met them up close because their human is a massage therapist who N went to maybe a month ago.

Anyway, we were out on our nightly walk, and I saw a woman walking towards us with a dog on the leash. I told N to take Bender to the other side of the road as we are working on his leash reactivity. I was looking across at them when I saw a small, brown shape flying across the road towards them at high speed. This brown shape was barking it's little fool head off. I told N to look out, but the high speed dog turned and headed for Barbie. I realised then that he was an Iggie. He demonstrated amazing agility by sprinting towards Barbie, twisting in the air, landing facing the other direction and taking off again. His owner was yelling his name over and over but he wouldn't listen. He was just darting around all over the place, on and off the road. Barbie was completely non-plussed. She just stood calmly by my side. I was actually shocked that she didn't try to chase him at all. She didn't even tell him off for saying nasty things.

I was just worried he would run onto the road, and I could see a car coming, so Barbie and I moved as far away from the street as possible. By the time his owner arrived, with the other Iggie on a leash, he had calmed down and was sniffing Barbie's butt. She ignored him completely.

Now, I let Barbie off leash in safe locations, like at the beach and in fenced dog park areas, but I would never dream of walking her off leash in the suburbs. I really have to question the sanity of someone who would let a little sighthound like that, who clearly doesn't like other dogs, off the leash when cars are an everpresent danger.

Just 5 minutes before, walking down the same road, we saw a high powered car speeding down the street, doing at least 80kph and being chased by an underpowered Police car. If that car had been heading towards us, the Iggie's chances of coming out of it unscathed would have been much, much smaller. 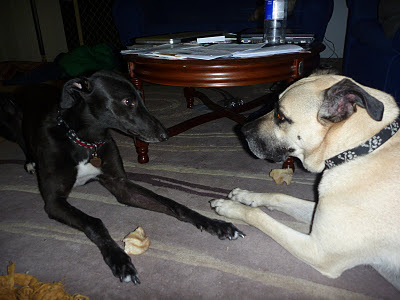 I just can not get over how good Barbie was. She did not show any signs of wanting to chase this very fast, small dog which hopped and twisted around in the air like a bunny rabbit!
Posted by jet at 9:25 PM
Resisting the chase!
2011-11-17T21:25:00+08:00
jet
barbie|italian greyhounds|prey drive|recall|unleashed|
Comments

We went out for a short ride this morning with a couple of cameras trained on Barbie. The cameras are a Camshot bike camera which I bought from Torpedo7, and an OTEK DVS 550 mounted on the bars of N's bike. The bike is a Bike Friday New World Tourist folder.

She was pretty tired from a run at the beach yesterday so she is trotting pretty steadily. Usually I can get a few more turns of speed out of her, but not today!
Posted by jet at 1:58 PM
Barbie Biking video
2011-11-13T13:58:00+08:00
jet
barbie|greyhound - bike|walkydog|
Comments 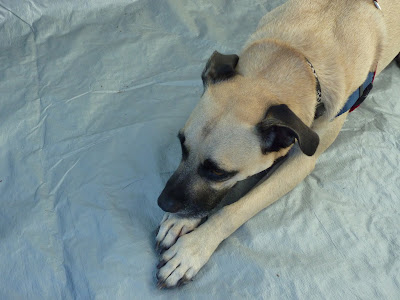 I have written before about Bender's fear of percussive noises. It probably started about 3 years ago and has gotten progressively worse with each exposure. Now he can hear a distant car backfiring and freak out. It's not an issue when we are at home but it effects his behaviour when we are out on walks, as he shuts down and goes into flight mode, pulling as hard as he can on the lead to get home as quickly as possible.

N took him to the vet a few weeks ago for his shots, and they discussed his problem. The vet is a friend of N's and is very fond of both the dogs. Her advice was that an anti-depressant may help him cope with his fear, and working with a behaviouralist will probably help too - but that most behaviour specialists won't work the dog unless it is medicated to start with to take the edge off.

He is now on amitriptyline tablets (brand name, ENDEP 50), he's started with 100mg, to be reduced to 50mg in a week's time. The only side effect is that it makes him a bit more sleepy than usual. I've also noticed him drinking more and seeming more hungry. He stares at his food bowl from about 5.30pm now, when his dinner time is 6pm. I have never really known him to ask for his dinner unless we go past his regular meal time. Barbie won't let us forget when it's time for dinner (or walks) anyway....

He still has a phobic reaction to unfamiliar noises on walks, but it does seem to me that he can recover a little better instead of just being shut down for the rest of the walk until we get back to the house. I have been able to get his attention back at times, asking him to heel and giving treats liberally. We are also doing more heelwork any way on walks so that he gets into the habit of doing it when he is relaxed, so that it is easier to get him to heel when he is stressed.

Last night we had a really long and loud fireworks display happening near our house. We had just gone to bed when it started, and Bender got on the bed and curled up between us where he felt safe. We ignored him til it was over and then kicked him out. I mused I should be thankful that he doesn't turn into a destructo-dog when his phobia is invoked. Really, in terms of impact on our lives, his noise phobia isn't that bad. He's not digging through walls or keeping us awake by barking at the thundergods.

The hope is that once the medication starts working then we can start working with the behavioural side of his phobia. I have a feeling it will be a long road but I really just want my boy to enjoy his walks again.