Last night Olive went on trial with a lovely couple who live in the Perth Hills - they have a young dog and alpacas. 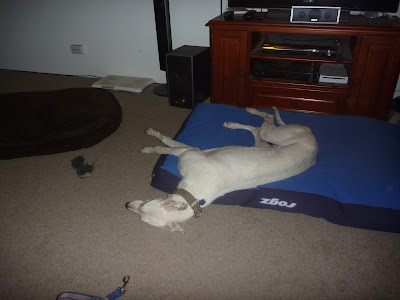 She has adapted well to house life, and has made much progress in learning how to use a dog bed since this photo was taken. N said 'nice try, but it seems she hasn't grasped the concept fully'.

Olive was nice to the kitties, most of the time, and they were quite happy to share space with her. Barbie seemed to be a bit subdued when Olive was here because she didn't want to be chased. It was probably a smart move. 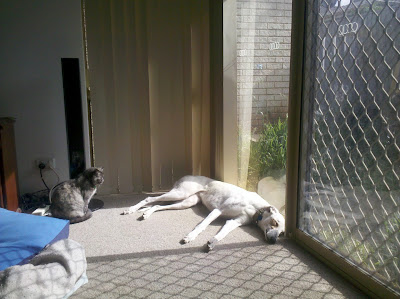 Good luck on your trial sweet Olive. You are welcome back here if it doesn't work out, but hopefully it will!!!!

Since Olive was gone, I had to do some doggie stuff to keep myself occupied. A friend of mine posted an adorable video of her dog Charlie doing 'roll over'. Charlie is a little boy, so I thought it was about time we committed Barbie's tricks to video and people could laugh at the differences between Barbie's roll over and Charlie's.

I didn't bother to edit the video so this is realtime of Barbie running through her repertoire.

What is your favorite dog trick?

Olive is really coming out of her shell. She has gone from just stopping next to you and standing still while accepting scratches to leaning against your legs and wiggling her butt when you scratch her. She is now playing chasey and tug-o-war with Bender. She jumps into the car without hesitation. There's no doubt that she is ready to go. 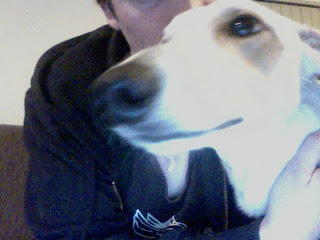 I took her to visit my buddy's new greyhound Miles and they played very nicely together with his toys before passing out on the lounge room rug. Miles is a bit of a 'soft' dog, Australians call him 'wussy', but Olive was nice enough to him. 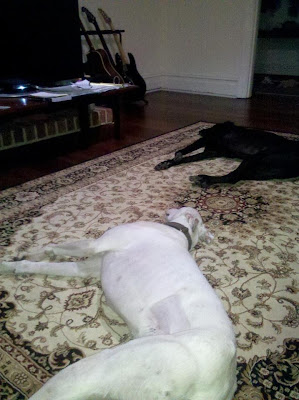 In the morning when my alarm goes off she sneaks up onto the bed for cuddles. She tried to sneak onto the bed with me last night and it only took a small amount of coercion to get her back onto her own bed until the morning.

Barbie is incredibly tolerant and lets Olive share her bed. I think Barbie actually likes her, even though she hogs my attention sometimes. 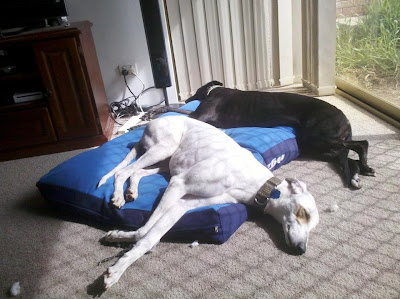 You know that a greyhound is relaxed when you catch them roaching at every opportunity. Olive has gotten better at roaching as I have fattened her up a little bit. 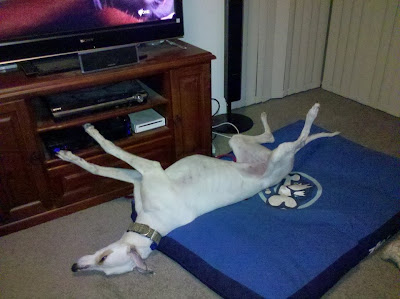 Olive met had a date this evening and will have another one in the morning. I expect that she will be adopted very soon. We will all miss her though!

New Coats for the Hounds!

Olive seemed to want a coat, so I had a look around for someone who made good value ones so that I wasn't spending all my money on the dogs, again. 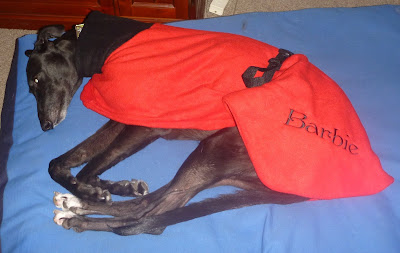 I found 'dishlickercoats' on ebay and ordered two of the lighter fleecy coats, with postage they cost less than $50. I got Barbie's name embroidered on hers, I thought it would be small but I was quite impressed with her name spelled out big in pretty lettering. I guess they liked her name! 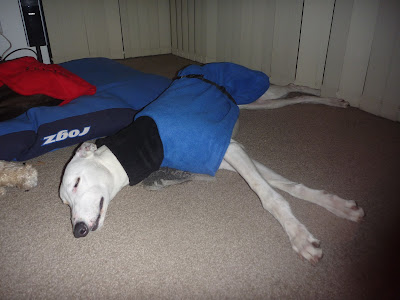 Olive is officially a house dog - she figured out the couch 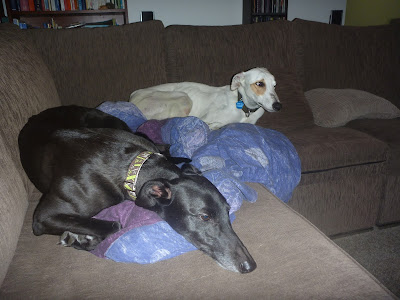 On Thurday Olive Oil made her visit to the Vet for her spey and vaccination. She was already microchipped as young greyhound pups are chipped here at 5 weeks old. The vet nurse said that her chip had moved and was right at the front of her neck. She told me that she once found a chip in a labrador's foot! If they can move around that far, it's no wonder that sometimes microchips aren't found sometimes!

The nurse warned me that she was being a sook and that she would probably yelp when I lifted her into the car. Yelp she did, but she continued on for a little bit just to make sure I knew she was hurting.

When I got home it was a huge struggle to get her out of the car, but eventually she got down herself, with a lot more complaining. She yelped every time she went to lie down on her bed too, looking right at me and doing some good old open-mouth whinging.

For some reason she decided the couch would be more comfortable. It must have been because she didn't yelp when she laid down. I expect she will be spending a lot of time on the couch for the next few days.

Mouse was cat safe, and as Olive's sister, I thought that she would be too. I was happy to be right as the only thing that annoyed me about Zelda was her attitude towards the cats. Here is a video of the first time Olive met Frou-Frou.

Olive has been really good with the cats for a dog who has never actually seen one before. She has lumbered after them a few times when they have run from her, but she is very easy to call off. Now that I have seen what real prey drive looks like, I think I have better perspective when a dog cries or bounces when they see a cat. As you can see here, Frou is the one doing the tasting - giving Olive a lick on the nose. 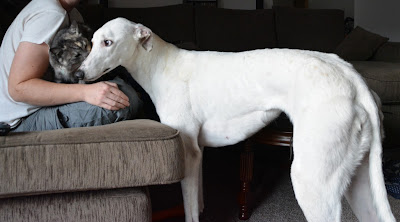 Frou is the brave cat, Mittens is still a bit traumatised by her experience with Zelda and is hesitant to come into the 'dog' half of the house.

I was sitting in the lounge room updating dog listings for GreyhoundAngels, and I heard Olive barking. When N went to investigate she saw that Frou was on the kitchen bench, eating the food that I had boiled up for the dogs. Olive was tattling on her!!! Tattle tale!! Not sure Frou will give you any more kisses now, Olive!

Olive has been listed as being up for adoption on Facebook, Gumtree and Petrescue, so I don't think she is going to be with us much longer. With that in mind we decided that we should try her out in some new situations so that we could get more of an idea of her personality. 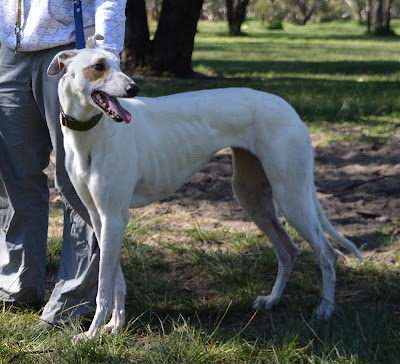 Barbie and Bender were pretty tired after their two hour outing to Whiteman Park, but I thought that Barbie would like to come out to breakfast. We went to the Partisan in East Perth again. We parked down near the river so we wouldn't have to pay, and got to take the dogs for a little walk to Claisebrook Cove, where the cafes are. 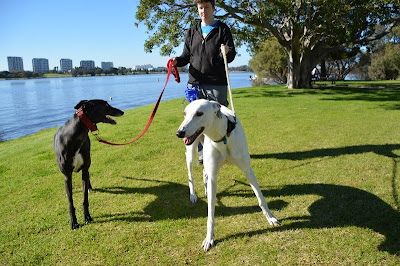 Olive is a bit like her sister Mouse, she doesn't like to walk in a straight line. I think she will understand the idea of leash walking fairly quickly though.

I ordered some fruity French toast and I didn't like it much - I should have stuck with poached eggs on toast, but Olive tried to stick her nose on my plate the second the waiter set it down. 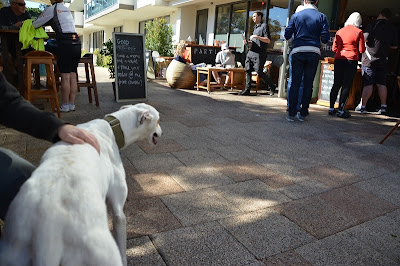 Olive is a real people magnet, and once they come and start patting her, there's no stopping, because she won't let them! She didn't really relax during breakfast, but she did pretty well.

When we walked back to the car, Olive jumped into the back by herself. We came home and let the dogs rest for a while and I watched a game of football. We then headed back out to the Avon Descent finish at Riverside Gardens with Olive to see how she would deal with the PA system and the maddening crowds. 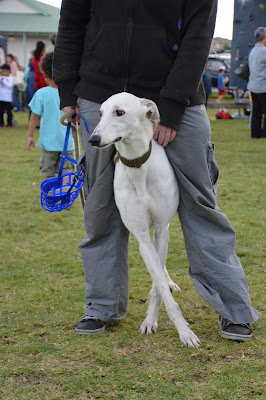 She was a bit tired and a bit overwhelmed by all the noise, but she didn't shut down and turn into a greyhound statue. I think she just needs to go to more of these types of events and her confidence will grow. She met some gorgeous kids who just wanted to cuddle her.

We also met a couple of ladies who had three tiny chihuahuas. The lady bought the smallest Chi over - who was about half the size of Frou - absolutely tiny. The Chi tried to sniff Olive's butt but only managed to reach her ankle. The lady held the little Chi up to Olive's nose, but the Chi was a bit freaked and was flailing it's legs around trying to kick Olive in the muzzle. Olive didn't even flinch.

We didn't stay long as it was clear that Olive was tired. When we got home she did exactly what Mouse did - refused to get out of the car. She was comfy on the back seat and just wanted to sleep there. 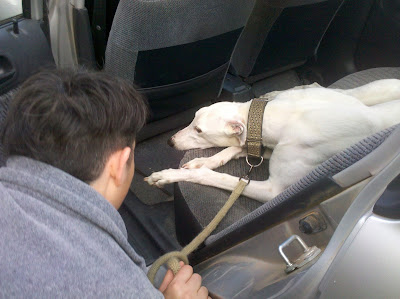 Ever since I picked Olive up last Sunday, I have been looking forward to the reunion of the two sisters. On Monday, Daniel, who is another Greyhound Angels foster carer, suggested we all meet at Whiteman Park on Saturday morning. The first thing I did was text Mouse's mumma to make sure she could come!

Mouse seemed really happy to see Olive, though I am not sure if Olive was as impressed. I had to take Olive's muzzle off to take some photos and I got this cute one of them catching up over a drink. 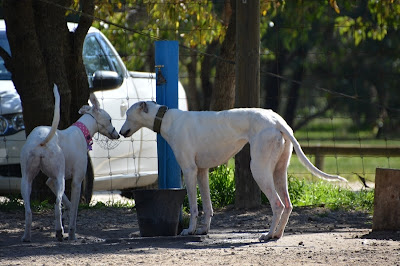 After they had all had a good run, the sisters settled down in the dirt together for a rest. Maybe they were glad to see each other after all. They did seem to spend a lot of time together. 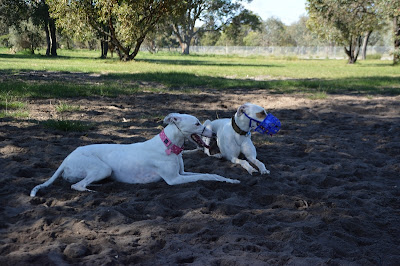 Barbie and Mouse also spent some quiet time together lying in the dirt, as you can see Mouse was having a hard time staying awake. 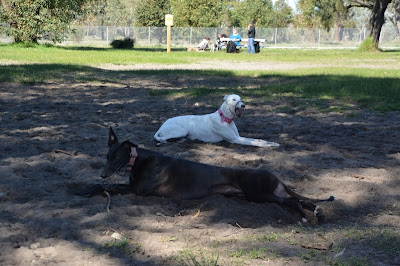 What were they doing that made them all so tired? Well Olive certainly found some new friends at the park - greyhounds often like the lil Aussie working dogs, kelpies, border collies and others. 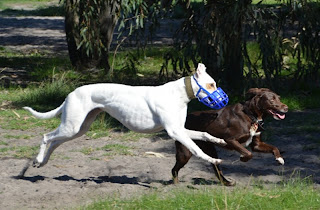 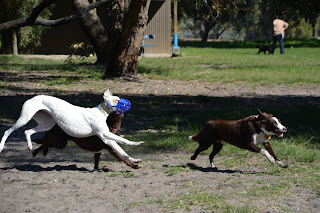 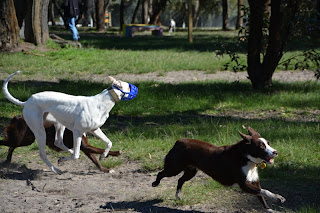 You can see that Olive and Mouse have similar 'playful' running styles, where they extend their front legs out further than their back legs in the extension part of their run.

There was another greyhound there called Wanda, she is a Whiteman Park regular and she loves nothing more than to go for a good burn around the park. Some silly dogs think they can catch her. Not a chance buddy!

Mouse gave us a good look at her silly face. Some doggies probably find this face quite scary. I am sure if I was a bunny I would be terrified! 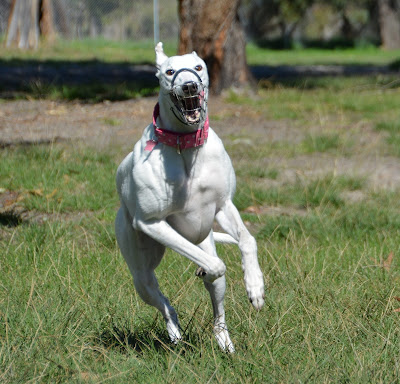 Bender had so many people throwing his ball for him that he ended up quite sore by the end of the day. He seems to run harder when he has other dogs chasing him too. 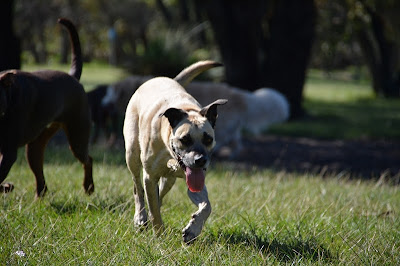 All up we were there for a couple of hours. Barbie spent a lot of time lying around in the dirt, but Olive and Bender were on the go almost the whole time. 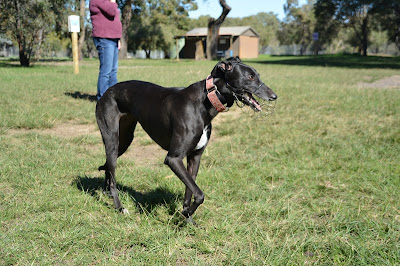 That was Saturday's doggie-time. I will write about Sunday shortly, when we took Olive and Barbie out to a cafe and too Olive to the Avon Descent finish line at Riverside Gardens in Bayswater.