I am not sure that my American followers will have even heard of it, but the Eurovision Song Contest is a perfect occasion for a party. Basically a bunch of European countries compete against each other in a musical and choreography extravaganza which is well known for it's tacky outfits and daggy pop songs.

We invited a bunch of people over for the party and we had to be a little creative with seating, as not everyone would fit on the couch. I cut a piece of carpet from the offcut rolls we had after redoing the lounge room and put it on top of an esky as a seat. It goes without saying there was no room for our spoiled pooches. 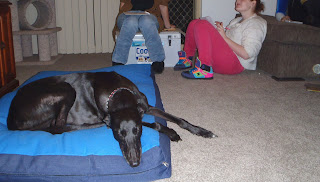 Good thing Barbie has a nice bed! Bender was a bit like a one dog tornado as people arrived, so we kept him out the back until everyone was safely in the house. Barbie politely greeted the first few people and then just went to her bed - there's no point wasting too much energy! 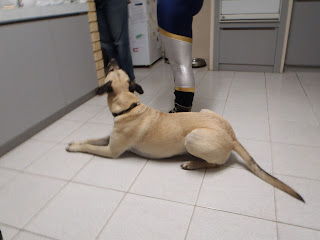 We all hung around the kitchen for a while, eating chips, dips and salami and ham. Bender was very interested in what was on the bench. 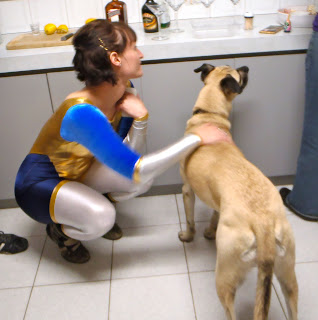 Even pats from one of his favorite friends didn't distract him much. He was good though, he didn't do anything apart from stare. Not even much drooling. A Eurovision party usually involves dressing up in silly outfits, and there were some very impressive ones. 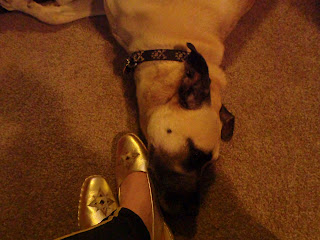 Bender cosied up with a lot of people feet. He started with my feet and then moved on to other people's. Notice all the pizza on the coffee table, and neither dog even looked at it! 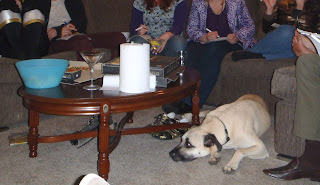 Even Froufrou came out to investigate. All the people and all the laughing scared her a little, but she knew there was attention to be had. She overcame her fears to be patted by almost all of the party guests. 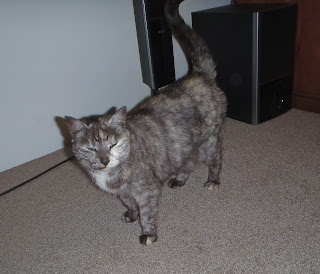 I was very proud of the puppies by the end of the night. They were so well behaved and accepted attention calmly. We don't usually have a lot of people around at once so I wasn't sure how they would go. They were exhausted the next day though. Entertaining can be so very tiring for dogs.

Froufrou has gotten so brave now. There was a time when she would hide under the couch if someone came over.

It was such a big day, and along with the photos Barbie took with my GoPro, I also took some video when we were hanging around at the start. Here it is, featuring many beautiful Greyhounds and some other dogs too.

Barbie and I flew solo at the RSPCA Million Paws Walk this year, and taking inspiration from Pitties in the City, I used a split ring to hang my Gopro off her camera on time lapse mode. The Million Paws Walk in Perth is held near the Swan River and it's a very nice walk along the paths near the water. You have the choice of walking 2.5ks or 5ks, or really any distance you want. Barbie and I went the full distance and she did better this year than the previous two years. 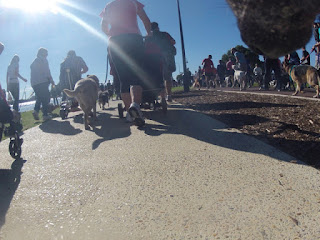 There were a lot of people and doggies near the start and Barbie wasn't sure where she should go. She tried to pick her way to the open space, so we ended up walking on the path closest to the river. 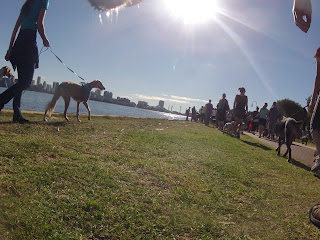 There were a lot of sight hounds on the walk. This little Saluki was a sweetheart. There were also wolfhounds, a borzoi, whippets and italian greyhounds, as well as our big group of greyhounds. Notice that you can see Barbie's chin in this shot, but her tongue is not yet protruding. 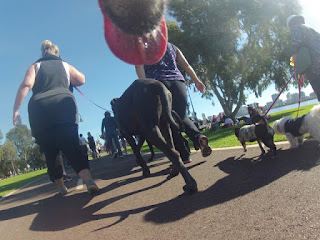 After about 4 kilometres of walking, the chin drooped lower and Barbie's tongue starts making a more frequent appearance in the photos. The Great Dane in front of us was a lovely fellow, as all Danes seem to be! 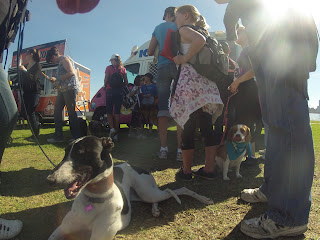 After a long walk, we decided to get ice cream at the finish. We joined the line and Barbie made friends with an adorable black and white greyhound called 'Mini'. Apparently Mini had not lied down all day, but she decided to follow Barbie's lead and flop herself on the grass as we were waiting in the queue. 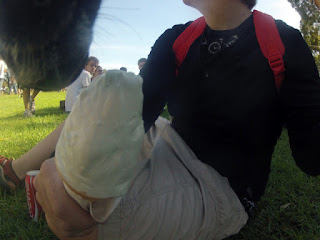 Barbie really enjoyed her icecream, and a lot of people walking past seemed to thing it was strange that a dog would eat an icecream. She was very dainty about it, carefully nibbling at the icecream until she got down to the cone while I held it for her, then crunching up the cone like any other dog treat.

The Gopro got a lot of comments as well, and I expect there will be some more dogs with Gopros hanging off their collars next year!

Barbie did really well this year, and didn't really regress into zombie-dog mode. She had a little sleep on the grass after her icecream which attracted more comments 'oooooh poor baby, she's tired!' On the way back to the car she flopped down in shady spots twice without warning, but she was quite willing to get up and keep walking when I asked her.

She also accepted pats from many, many friendly strangers. She was quite good with all the attention. All in all it was a great day and I hope it raised a lot of money for the RSPCA. What do you think of Barbie cam?

Froufrou and Mittens in a Battle for Supremacy...

OK, so we have had a houseguest for the last week, and she found it very strange that I went running for the camera when I saw Mittens and Frou Frou on the cat tower at the same time! I didn't know what was going to happen, but I was pretty sure something would happen....the cats have a bit of an ongoing war for high ground in the house. It's a strategic war and very rarely leads to a physical confrontation, usually there is just a lot of posturing. With the cats, possession really is 9/10ths of the law, and so whoever occupies the high ground the most stakes a claim.

I won't make any more comments here as it will spoil the ending, but let's just say, there was a clear winner this time.