While grocery shopping yesterday, I noticed this little pig with a solid rubber ball inside was on special. Bender had one before, and it lasted him an unusually long time. As the piggie was half price, I grabbed one and continued my shopping. 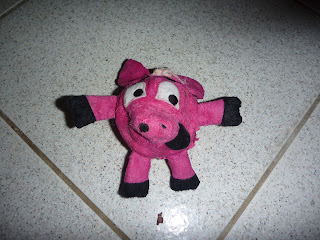 Unfortunately for the piggie, if you replace a toy that Bender once destroyed with an identical toy - the new toy is destroyed at a quicker rate. This is the damage after a couple of hours. 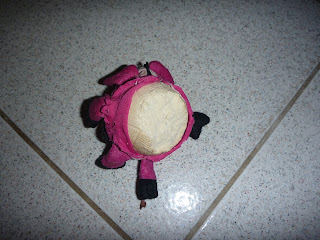 He ripped piggie's back open and then spent a while chomping on his solid rubber ball core. He also managed to destroy the toy I bought for Barbie in less than 5 minutes. I didn't take any pictures of that one, it went straight into the bin. 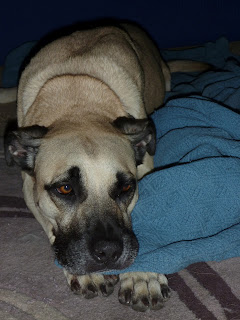 Oh Bender, when will you learn! The more toys you destroy the less you have to annoying shove into our faces in your attempts to start a game of fetch!

Taking the edge off...

It's been a week and a half since Bender went to the vet to have his half-broken dew claw taken off. He has healed really well and was allowed off leash again this weekend. We took them down to the beach, which gave me a chance to have a play around with my brand new Gopro Hero 2 camera.

I continue to be impressed with Barbie. We got a new couch about a month ago and have been trying to give the old couches away for free. We got rid of the best two almost straight away, but the dirtiest couch sat around until this morning. I saw the guy rock up in his ute and put Bender outside. Barbie came to the door to greet him but I told her to wait, she stopped in her tracks, and then went back to her bed. We were able to pick up the couch and move it out the front door without her even moving. Totally impressive! 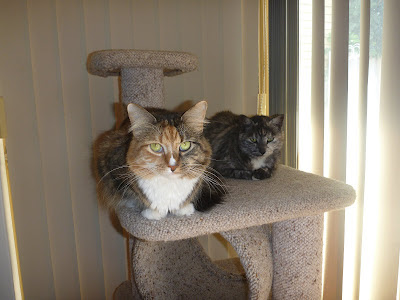 The kitties have not been on the kitty tower together, until now. I slunk off to grab my camera because this is such a rare thing and I knew it wouldn't happen again any time soon.

They shared like this for about 10 minutes before Frou had enough and left. Mittens can't out muscle Frou, but sometimes she can be more stubborn in the war of attrition.

Diligent nail cutting may have it's rewards...

This is Bender tonight. He has been put under, had two nails which had been partially ripped off tidied up, and his others cut right back. 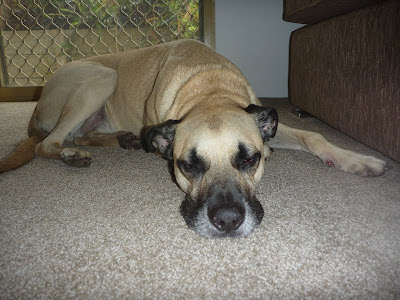 He has ripped nails off before. He goes so hard chasing his ball that his nails break under the force. This is the first time he has ripped off a dew claw, but it didn't completely come off. 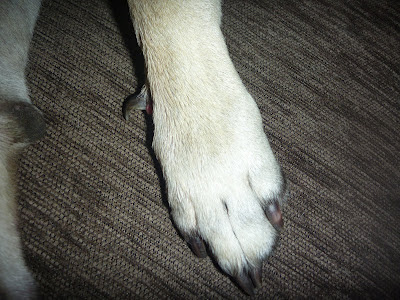 While he is healing the vet said no walks for a week!! She said that if we get desperate we can take him out but should try covering up his foot with a sock. I think he'll be OK to walk in a couple of days. There is no way I'm keeping him in the house for a week!
Bender's nails have never really seemed to need trimming - they get worn down by themselves, but after this I think I will keep them as short as possible. The quicks should be fairly high up now the vets chopped off all his nails while he was sleeping. Hopefully we can work with his paw-aversion by offering yummy treats and maybe only doing a paw at a time.
I clipped Barbie's nails as soon as I got home. Her nails are so thick and dark, I got her quick a couple of weeks ago and she screamed at me. I only just nipped it though, it barely bled. She tries to pull her foot away after you have done one, but she doesn't carry on like Bender.
I had a look at using a Dremel to file dog's nails on youtube, and for the added noise and hazards, it seems like it takes longer than just using a good sharp pair of dog nail clippers. I think I'll stick to the clippers!
Posted by jet at 5:44 PM 1 comments

Greyhounds are agile and athletic creatures, but when we first got Barbie she didn't know how to use her legs for anything aside from walking, trotting or sprinting. Anything that involved uneven surfaces was a problem. Stairs, jumping into the car and jumping over logs while hiking were all very difficult for her. It even took her months to figure out how to get onto the couch.

Our regular routine is that I get home from work, get greeted enthusiastically at the door, and struggle my way through the house to let the dogs outside.

I usually do something else for 10 minutes - go and check the letter box, bring the bins in, take off my shoes, that kind of thing. Barbie makes her presence known at the back door when she wants to come in.

This evening I had just walked up the driveway and back, when I spotted this through the kitchen window. 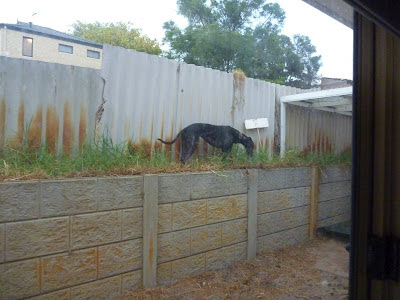 The grass in the yard has just been slashed, so Barbie was on this narrow ledge between the retaining wall and the fence partaking in the only green grass she could find. If she's happy walking along there, the dog walk should be no problem for her, I reckon!
Posted by jet at 5:53 PM
SPRUNG!
2012-04-03T17:53:00+08:00
jet
barbie|greyhound - agility|
Comments