Mittens is a very entertaining kitty. She isn't young anymore but she still has her moments, like this one where she stole Bender's tyre toy and attacked it for ages. 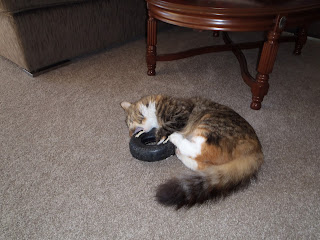 We have developed a little morning ritual. I am usually lying on my side when I wake up, and Mittens is usually perched on my highest point - my hip. My alarm goes off and I reach down carefully to turn it off without upsetting her. I then roll slowly onto my back, and like a veteran log roller, Mittens walks around and sits on my belly until I get up.

I usually make coffee and eat some toast, and then get ready to go, changing into my biking gear. Mittens swarms around me, dashing around my legs and standing up on her back legs to head butt my hands. When she gets tired of jumping up she will just hold on to my shorts with her claws while I pat her.

This morning I added a new element to our morning ritual. She usually sits in the bay window and watches me ride away. I decided to see what she would do if I held my hand up to the glass. She rubbed herself against the window next to my hand like one of those poor kitties you see in those glass cases at pet shops.

She has come a long way from the dirty, tiny, feral kitten we bought inside the house three and a half years ago.

We had a couple of busy nights last week, and Barbie didn't get to go on her usual half hour walk around the block. The dogs don't ask much of us - a walk a day, food and water. If we skip out on the walks then things start to get a little crazy. 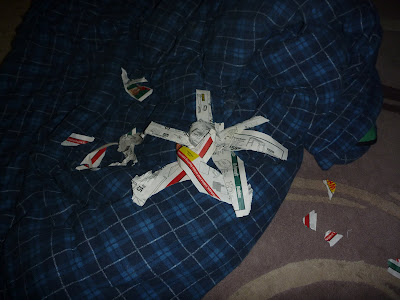 We had left a pile of junk mail on the coffee table when we went out to work, and when I came home I discovered that Barbie had taken a shine to a particular hardware company catalogue.

She had efficiently shredded it and I thought perhaps I could use her services next time I have a pile of private information to dispose of. 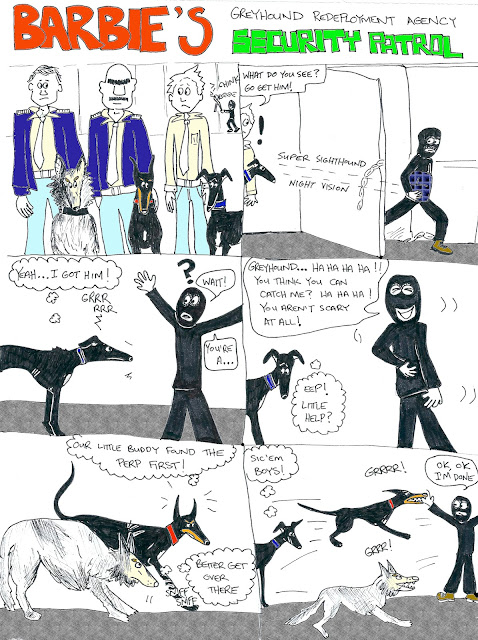 For full size, check it out at my DeviantArt, thegreyhoundmuse

More to come, next weekend! 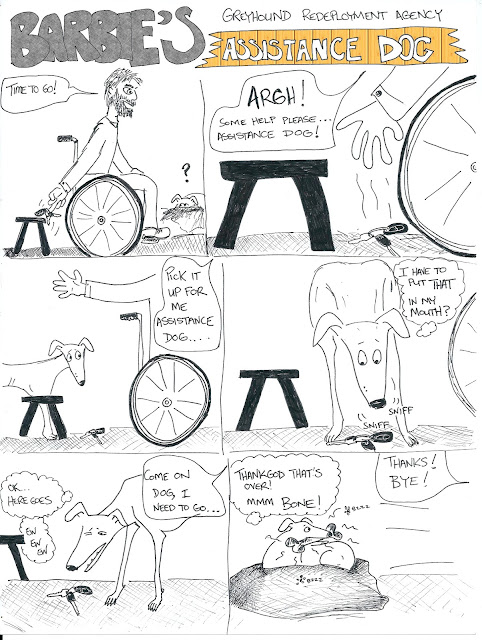 See the bigger version at my Deviant Art account, thegreyhoundmuse. 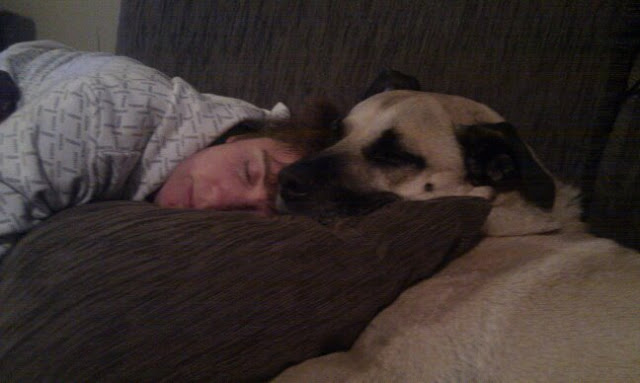 Email ThisBlogThis!Share to TwitterShare to FacebookShare to Pinterest
Labels: bender

The dog park at Whiteman Park always has a great variety of canines romping around enjoying their freedom. 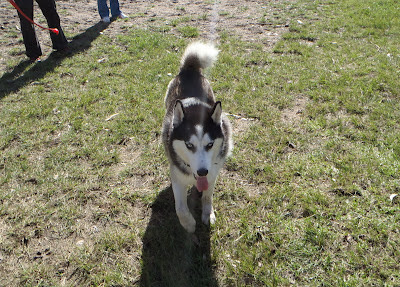 This adorable Sibe tried to check my pockets for treats. I love Sibes, they are so pretty and usually quite sweet as well. There are usually a few Sibes at Whiteman Park because the park is fully fenced so it keeps their wandering and adventurous tendencies in check. 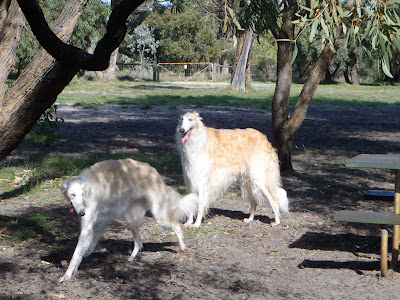 A pair of Borzoi always get a lot of attention. I am sure their mum gets bored of explaining to people that they are Russian Aristocrats. They don't tear around the park quite as quickly as Barbie but they do get a bit of speed up, and the way their hair flows as they move is just amazing to look at. 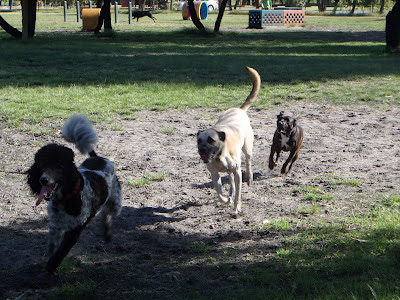 Bender is always the popular kid. He had these two chasing him pretty much 100% of the time we were at the park. The small brindle doggie barked the whole time trying to get Bender's attention but was never successful! 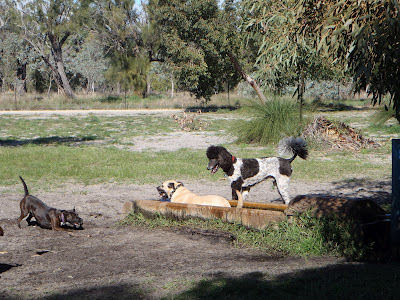 Bender's new friends watched him very closely wherever he went, including when he had his rest in the trough. 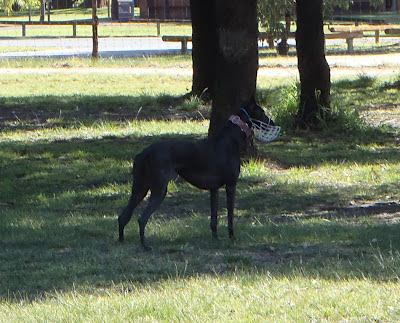 Barbie stood sentry duty and made sure that everyone who came in the gate checked in with her first. 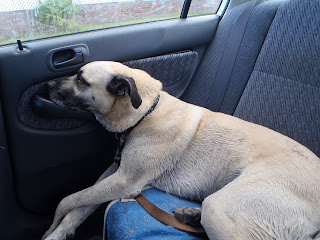 After a good run, they were exhausted. Bender thinks that the car arm rests are the perfect height and shape for resting his nose in.

It is always good to take the dogs to new places - it means they are not at home causing mischief, but it also means that they expand their experiences. The more new experiences dogs have, the easier it is for them to adjust when you throw them into different situations.

When we were babysitting, we asked if we could bring the beasties along, and the answer was yes! The only problem from the dog's point of view was that N only bought along ONE DOGGIE BED!

The house had a hard floor and there was only one bed. Barbie in particular was perturbed by this. They had to share. 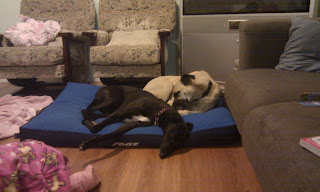 Barbie started off by trying to take up the middle of the bed in the hope that Bender would give up and let her have the whole thing. 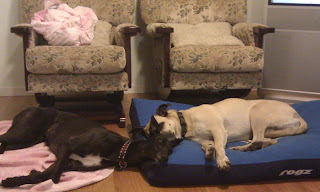 Bender was aware of this tactic, and somehow managed to reclaim the whole space, with Barbie having to accept the corner of the bed as a pillow. 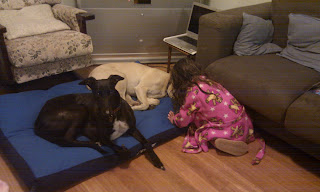 As usual, the dogs were great with the kids. We always supervise them very closely, but the girls are very gentle. The dogs certainly appreciate it. I think it helps that they can have a dog each, though they did seem to prefer patting Barbie for some reason. Perhaps it was because her hair is silkier? Or maybe because she is generally more still and calm than Bender is?

I like to introduce the dogs to children at every opportunity. It's really a learning experience from both sides - the dogs learn to be calm and sweet and tolerant. The kids learn how to act around dogs, and hopefully learn that dogs are the most awesome thing ever.

Yes, that's me, on a mission to create more 'dog people' !