Barbie lost 7 teeth today, with a further 4 that are marginal. The Vet was convinced she ate soft food! She obviously doesn't chew her food anymore and just gulps it down. She is now going to have to eat super-big dental biscuits that force her to chew, and we will have to give her bones when Bender can't steal them from her. 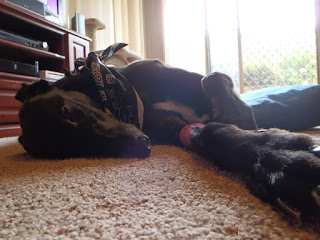 I can't help but feel that we really dropped the ball on this one. I knew that Greyhounds have teeth problems, but I had no idea her teeth could get so bad in the 12 months between check ups. 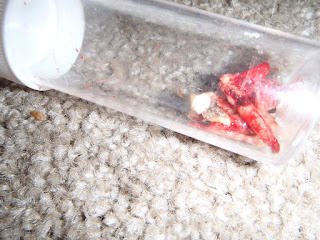 The vet has recommended we brush her teeth, or that we get her a clean and scale once a year. I know how ineffective human teeth brushing is (I mean, I still have to get a clean and scale once a year!), so I think we will be switching her to the special dental food and making sure she gets more bones and peace and quiet to chew them in. We shall see what the Vet's opinion is next check up time, and in the mean time I will be a lot more vigilant about what is happening inside her mouth!

The Vet and all the staff seemed to love her, and were impressed with how placid she was. She didn't complain at all. They even sent her home with a spiffy looking bandana, and gave her a nice purple vet wrap which says 'Ouch'. That's my girl, winning fans wherever she goes. 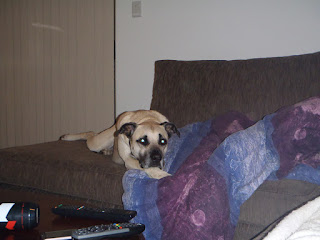 Like Bender's devil eyes? But he really isn't the devil in the house...

Barbie can be very manipulative. She figured out a new trick yesterday when Bender was occupying her spot on the couch. She got up from her bed, ran to the front window and barked. Bender had a puzzled look on his face, he hadn't heard anything outside, but he couldn't let Barbie upstage him, so he got up and raced to the window as well.

As soon as he left his position on the couch, Barbie left her newly adopted guard post, and jumped straight into his spot on the couch. 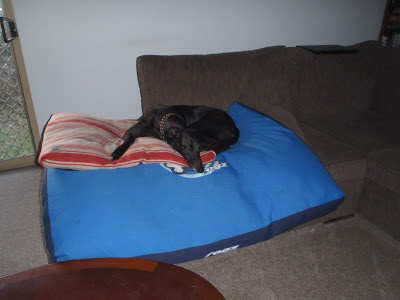 I moved the dog beds so that I could vacuum the carpet, and Barbie saw this as a perfect opportunity to continue her pursuit of ultimate comfort.

I had to let her because she had bad news at the V-E-T this week when she went for her annual vaccinations and check up.

Finally her Greyhound tendency to have cruddy teeth has caught up to her at the age of five. The Vet says that she has to have at least one tooth out, maybe three. The problem is with the molars right at the back of her mouth. They were fine less than 12 months ago but I had noticed she was getting tartar build up over the last 6 months or so. My theory is that she can't do a proper 'teeth cleaning' session with a nice bone because she has such a weak jaw. Her teeth kind of skate over anything hard she tries to eat - it's very similar to the sound human teeth make as a gobstopper or Chupachup rattles around in a human mouth. It is nothing like the crunching, chomping sound Bender makes when he is given a part of an animal's skeleton!

Anyway in a couple of weeks she will be going in to have them out, and have the rest of her chompers cleaned and scaled.

So for now I will let her sleep on her mountain of bedding.

Mittens and the Big Bad Greyhound

Doggie stereotypes are alive and well, and one of the stereotypes that irks me the most is the image of the Greyhound as a cold blooded hunter. A vet once told me not to let Barbie near any cats, and was unapologetic when I told him that she lived with two kitties. Then there are all the people who say 'oh yeah Greyhounds need muzzles because they will eat cats on the street'. Recently a Ranger advised a woman who was interested in getting a Greyhound that 'in his experience' it would eat her Maltese! 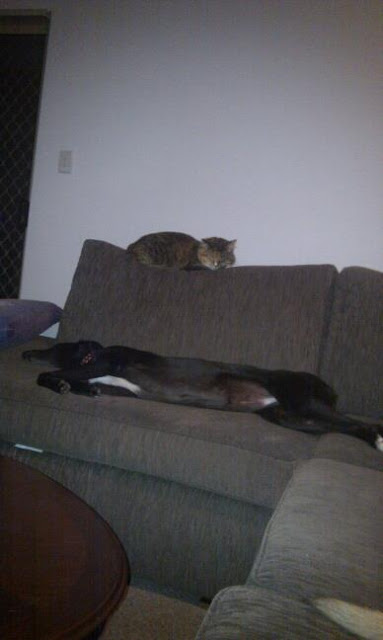 Barbie is a great example of a Greyhound who has prey drive but can live quite peacefully with her own cats. She is now always polite with small dogs, even those who bark at her.

Anyway it brings us to our story for the evening. We were all lazing around on the couch, and Barbie and Mittens were in a very similar position to the one above. Barbie then sat up, and Mittens gave her a playful swat.

Barbie gave Mittens an obliging sniff, and Mittens swatted her again, this time with her claws out. She managed to somehow dig her claw into the back of Barbie's neck. Mittens is not very good at retracting her claws, and so she got stuck. Barbie tried to lie down, and felt the claw tug on her scruff, which elicited the GSOD (Greyhound Scream of Death).

Mittens managed to let go and was duly chastised for assaulting the Princess. I had to examine Barbie's neck but found no blood. The claw was just in Barbie's hair, so no damage done.

My theory has always been that the GSOD is a signal that the dog is not actually hurt, just surprised. The GSOD also illustrates beautifully that Barbie sees the kitties as her equals and not a lowly-ranked being that can be snapped at or growled at. 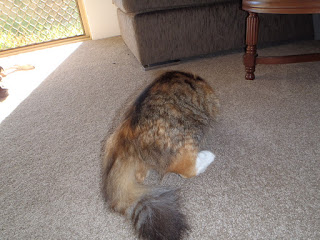 Barbie is 5 now, which means we have had 3 years of harmony between her and the cats. Usually any dramas are between the two cats, and everyone else gets along just fine. Take that, anonymous Ranger!