Fun on the water - kayaking with the hounds

I have posted about kayaking before. I spend a fair bit of time acclimating Mouse to the kayak while it was sitting in the back yard. The first time I tried to take her out she was far too obsessed with water fowl and I had to hang on to her leash the whole time. This time we went out and she surprised me by being very patient and awesome in the boat. We paddled for half an hour or so, got out for a picnic, and then for an hour more.

Of course, she was a little bit annoyed with me that I forgot to put the camping mat down on the bottom of the boat for her comfort. I didn't really think she would want it because I didn't think she would cooperate and allow us to go out for so long.

Turns out she actually loves it! I think all the time in the bike trailer helped her get used to balancing when things are moving underneath her feet.

We took Barbie out later on and she isn't as happy in the kayak, but she sure does better than Bender who does his best to tip you out and then jumping out and swimming to shore!

It's funny how Mouse can be so highly strung in some situations and so mellow and easy going in others. She doesn't need a bribe to 'trailer up' or to get into the kayak. Barbie is yet to go in the bike trailer, but I will wear her down.....
Posted by jet at 6:57 PM
Fun on the water - kayaking with the hounds
2014-11-28T18:57:00+08:00
jet
barbie|dog - kayaking|greyhound - kayaking|kayaking|mouse|
Comments

We are now finally muzzle free!

I think I already posted about Barbie getting her Green collar which allows her to be muzzle free in public. Recently Mouse went to the GAP kennel to be assessed and surprising NOBODY, she passed with flying colours. 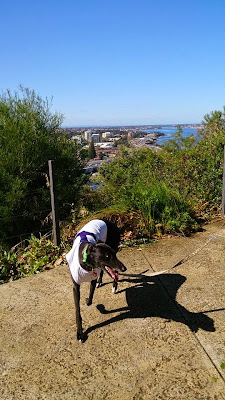 The test is pretty simple. The greyhound has to stay in the GAP kennel and is repeatedly introduced to a French Bulldog. If the greyhound doesn't show an inappropriate prey response, then it passes the test.

This is what Mouse had to say about 'Green Collar Camp':

"It wasn't that exciting really, we stayed in this little kennel, got let out into a little pen to bounce and toilet.... and around lunch time every day I got to play with a little French Bulldog.

Really I ignored her because she was a bit uncouth with all her snorting and squeaking and scooting around. My mum Bronwyn and her foster brother Junior were in at the same time and I was next door to mum in the kennel. She was a bit sad about being in the kennel so I tried to cheer her up by telling her stories about the cats I live with. She thought it was a bit weird that I would live with cats and tried to tell me I should chase them. I tried that when I got home but the Servant told me off so I stopped."

She was so cute when I picked her up - she had clearly not had her usual amount of exercise and stimulation so she was a little bit crazy. She bounced on the end of the leash all the way to the car.

The rest of the pack were pretty sad without her here. It was very quiet. It was all worth it in the end though! Now we can go to obedience class without looking over our shoulder! 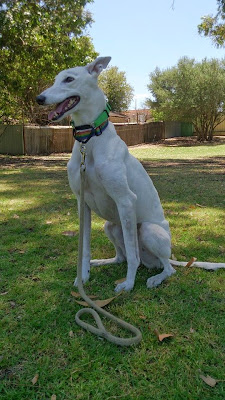 Here in Australia Halloween is getting more and more popular. There was a market happening a few suburbs away and they were encouraging children, dogs and adults to come along and get dressed up for the occassion.

I bought an adult sized costume vampire cape from a discount store, and lucked out because I was charged less than it was marked for and it was $12!

It was 140 cm long so clearly too big for the Mouser. Mouser wasn't home last week because she was away going for her Green Collar (more about that next week), and Barbie refused to get up for measuring purposes. Bender ended up being the model, and it fit him pretty well. 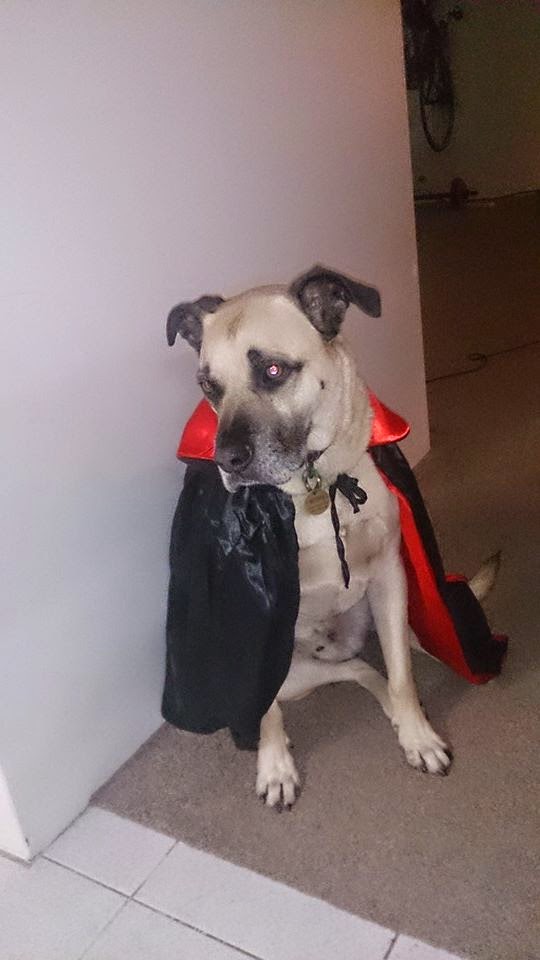 I picked Mouser up on Thursday night and tried it on quickly. It seemed like it would do, and I added to the outfit with a medallion (which was from a bike ride I did in 2011). Then on the day I added some eyebrows. 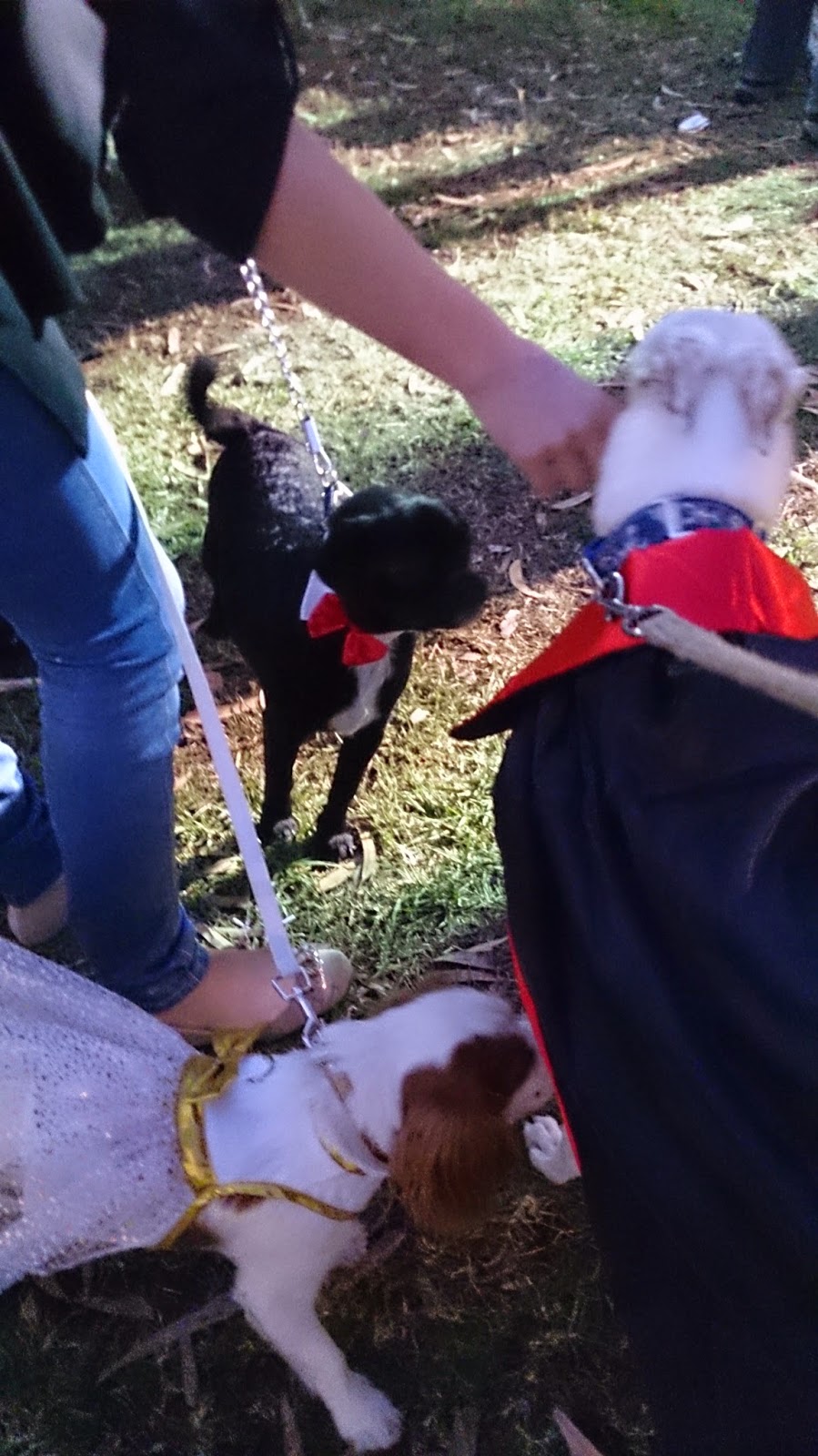 There were a lot of other dogs there who were dressed up too, but they all admired Mouse's cape. It turned out to be just a little bit too long for her so I had to make sure she didn't stand on it as we made our way through the crowds. 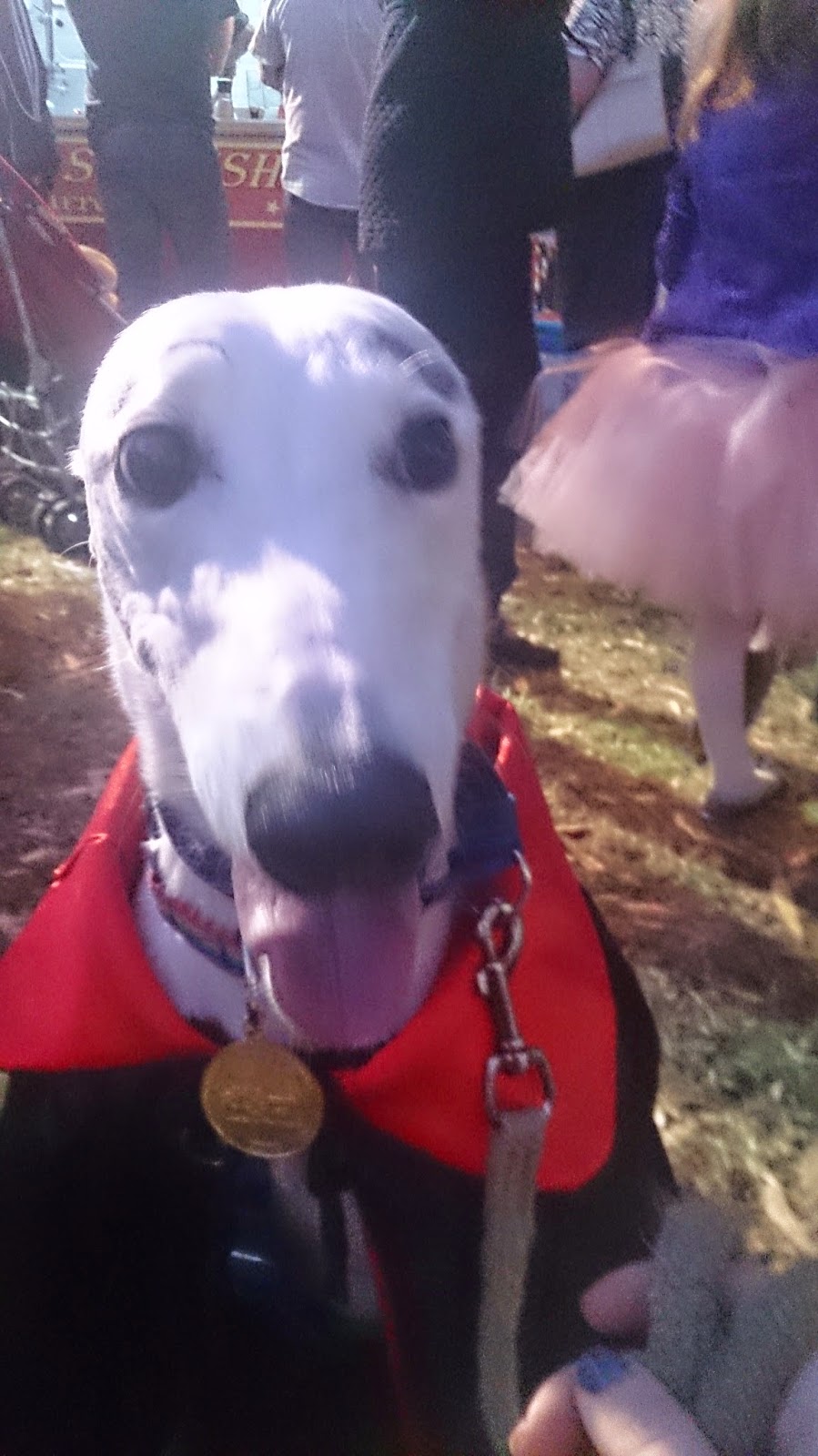 We also rode there, so I decided that I should take the GoPro and make a video. I ordered a crepe and sat down on a park bench to share it with Mouse. Then I dug into my pocket to pull out the camera, and .... it was gone!

The mozzies were biting and it was dark so after a brief search I gave up and went home. My phone number is on the back of the case so I figured that the chances were good I'd get it back if an honest person found it.

At about 5pm on Saturday I got a phone call from a strange number, so I leapt across the room to answer it. It was a lovely lady who had found it in the park! I drove there and grabbed it off her straight away. So glad and lucky to get it back!!!!

Here is the video: