I mentioned in my last post that Bender and Mouse were the frontrunners in the game of 'who will ride in the trailer first'. Today we took them both out for a short 10 minute ride to a local park (about 3 kilometre round trip).

Mouse didn't want to get into the trailer in the driveway. She kept trying to get in the car. We decided that we just needed to take the plunge and shove her in.

She lied down and made herself comfortable. She seemed to do pretty well, on the way to the park she spent her whole trip lying down and just sticking her nose up through the 'sunroof'. On the way home she sat up and enjoyed the view a bit more. As she is small she is quite easy to tow. 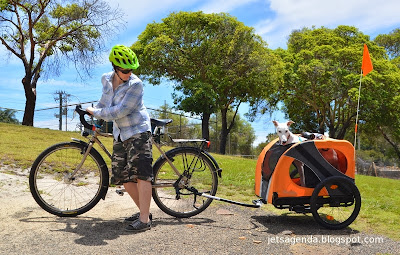 Bender jumped right in to the trailer and spent all of his time with his head out the top enjoying the wind flapping his ears about. Bender's anxiety around keeping his pack together came through a couple of times when Nic stopped or went too far in front - he cried and was restless if she wasn't right near him. 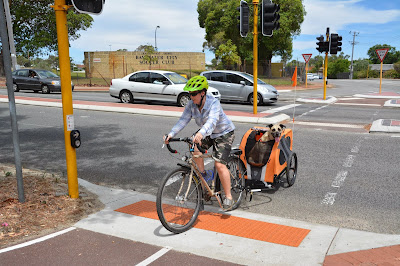 I think if I took him out by myself he would be fine. I plan on taking him down to the local park by myself maybe a couple of times a week. It is a park that is generally not very busy so we can avoid the ball throwers and keep Bender from hurting himself and ending up a cripple.

I will be working up the distances with both of them so that I can bring them along to the local cafe strip, the river, and the fully fenced off leash park which is about 6km away.
Posted by jet at 11:50 AM 4 comments

A day in the live of a volunteer - greyhound transport

As my followers in the USA can appreciate, sometimes dogs need to be transported long distances in order to hook them up with foster homes or adoptive families.

I turned out that this guy needed urgent transport on the weekend to a family who offered to foster, but they were 600 kilometres away. I volunteered to drive him half way there and the foster carers met me there. 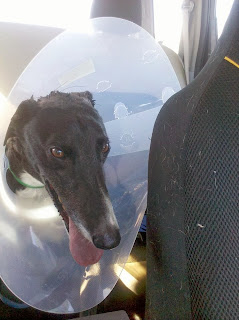 It also just happened to be one of the hottest days of summer so far with a maximum of 41 degrees celsius. I had the air conditioning cranked so once he settled he didn't pant too much, he was hot when we first got into the car and pretty warm towards the end as the air con stopped working so efficiently.

He was an angel in the car, just lay down quietly in the back. He had just had his sterilisation procedure but he also had some stitches in his head due to an unfortunate incident with another dog.

He is doing well at his new foster home and he will make a lovely pet for someone!

I made a little video of the trip, enjoy :) 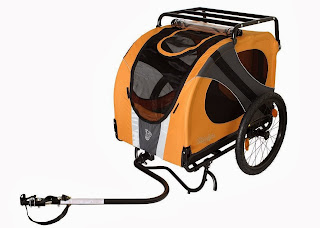 This year I got a fairly pricey birthday present. It wasn't really a present for me though, it was a gift to the dogs! It is the DoggyRide Novel 10th anniversary edition which comes complete with roof rack, kick stand and memory foam mat.

There are several places we like to go which are within the 4 - 6 kilometer from home range which is just too far for Bender to really walk to these days. It seems like a waste to load the dogs up into the car for trips like this, especially if only one is coming with me.

Sometimes I will take Barbie to people-watch at a local cafe with me and I just feel like a prat for driving the 3 kilometers and clogging up the local roads with my vehicle parked on a verge somewhere. I think if she takes to the trailer then things will be easier.

The day the trailer arrived I set it up in the lounge room with the wheels on and stand down. Mouse went to jump in straight away but unfortunately the kickstand didn't hold and folded forwards, making Mouse let out a little surprised squeak and make a hasty exit.

I took the wheels off and folded the kickstand up, and managed to entice both greyhounds to stick their front paws in, but neither went the whole hog. Barbie was the most suspicious of this contraption, and being the tallest and leggiest of the bunch it will probably be the least comfortable for her. I do think she will accept it if she sees others riding in it though, in a similar way that Mouse taught her wearing a coat was a good thing.

The biggest surprise was Bender. I decided that having a long lasting treat like a Dentastick would be the best way to get the dogs to put their whole bodies in. Bender got into the trailer, and allowed me to lure his head through the top hole with the dentastick, and sat in the trailer chewing it while I held it. It got a bit too short for me to hold so I let him take it and he stayed sitting in the trailer for the 30 secs it took to finish instead of hopping straight back out.

This video shows how far he has come - jumping in with the wheels on and just sitting there!

Mouse has also made quick progress, jumping in and settling down with the wheels on. I even zipped the door closed for a few minutes!

The Doggyride has quite a good leash attachment which allows the dog to be secured into the trailer with a harness, and the Wiggles Wags and Whiskers harnesses I use will work well.


Once we get to rolling I will be walking the bike with an assistant feeding the dog as we go. Then there will be a leap to short rides without the assistant, working up to the 5k ride to the fenced park a couple of suburbs over.

Barbie isn't so sure about the trailer yet, she's the only dog who hasn't hopped in!

I plan to go slowly with this trailer introduction and don't expect to be out and about towing the dogs until 2014, but there is certainly promise. If it doesn't work out I expect that the second hand market for the trailer will be pretty good - I had to import this one from the USA via Amazon as high quality pet trailers here are rare as hen's teeth and priced accordingly!
Posted by jet at 1:11 PM 1 comments

If you're doing it right, everybody will be dancing (Esperance Road Trip Video!!)

4 days in 3 and a half minutes? Challenge accepted. This is one of the most beautiful places in the world. It's a long drive but it is more than worth it. I would love to retire to Esperance, Western Australia!