This cafe is a tiny one in the suburbs, on Beechboro Road, Bayswater, Perth. It used to be a really bad fish and chip shop but about 6 months ago a very lovely couple took over and made it into a cafe. They mainly cater to tradies getting their early morning coffee fix and they take coffee orders by SMS.

Their Urbanspoon page is here:

We decided to take a stroll and get some breakfast there this weekend, and of course Barbie had to come to give her two cents worth. 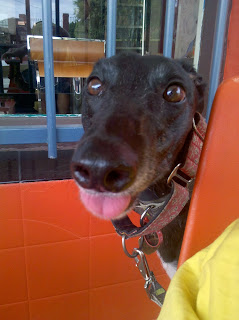 She seemed to be a little perturbed at first that we didn't bring her blankie, and so she decided to poke her tongue out when I asked her to pose for a photo.

There were a lot of people coming and going to collect their take away coffee orders. Barbie looked wistfully at them hoping for some attention. After we had finished our breakfast she got some pats from some nice ladies who had been sitting there for a while before even noticing Barbie lying there quietly. 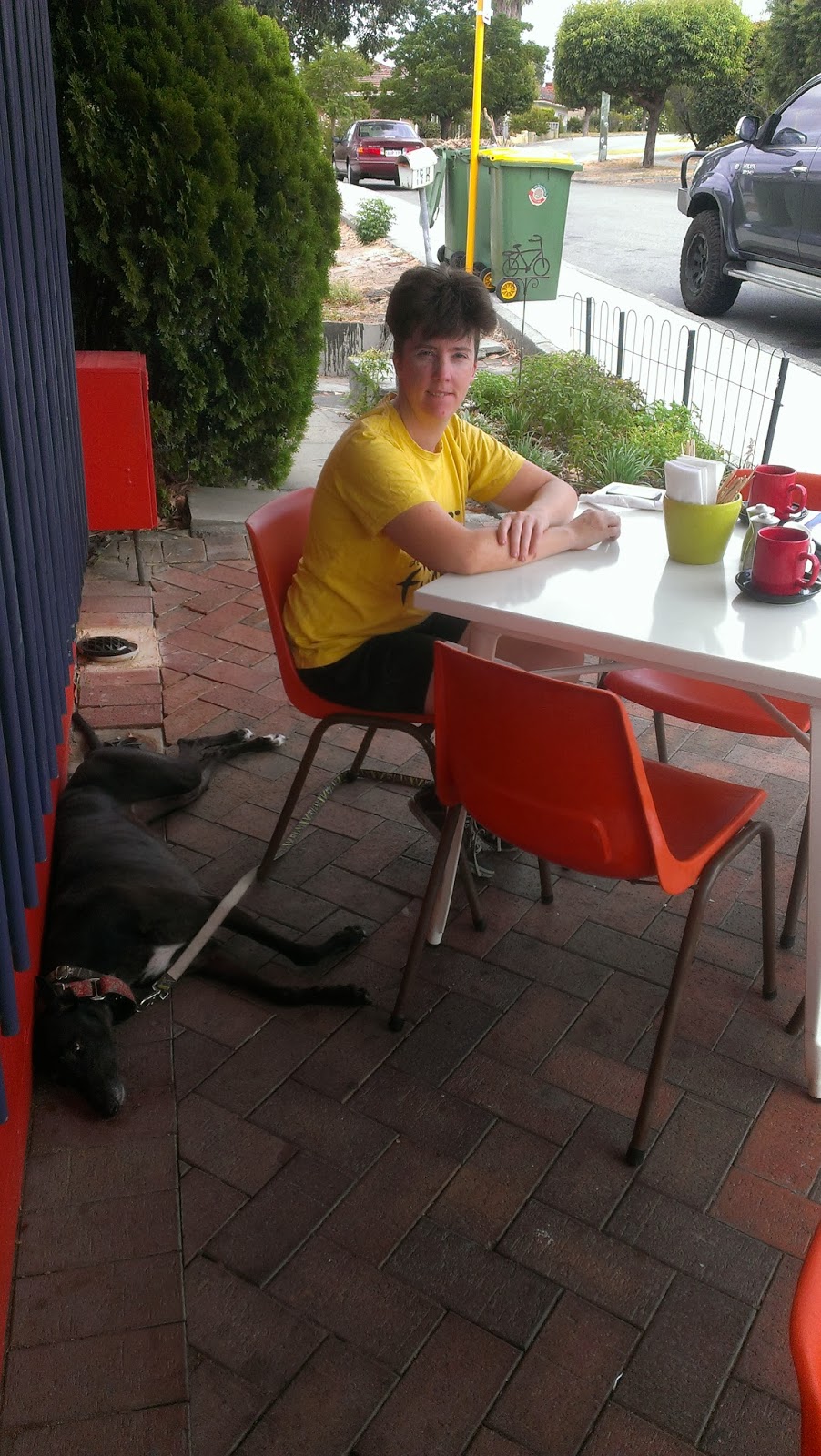 The outside area has three tables, but there is usually one free. The surrounds are pavements but they are nicely shaded. After thoroughly inspecting the area for scraps and crumbs, Barbie settled down behind our table. 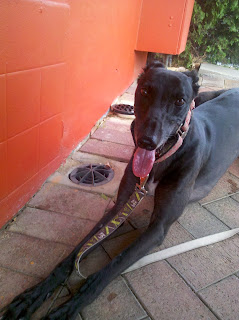 My coffee arrived very promptly. Fortunately it wasn't a really windy day so my chocolate didn't try to fly away as it has previously! 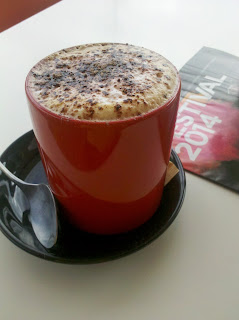 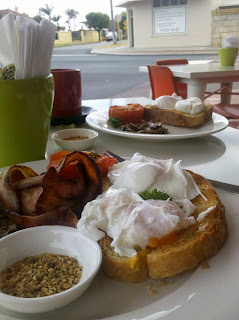 The coffee was nice, and the food was good too. The eggs were perfectly poached, and the bacon cooked nicely - I really don't like it when they overdo it and it's crunchy.

The food was a bit too much for me, so Barbie got quite a bit of bacon. She didn't complain. In fact the bacon passed her test with flying colours. 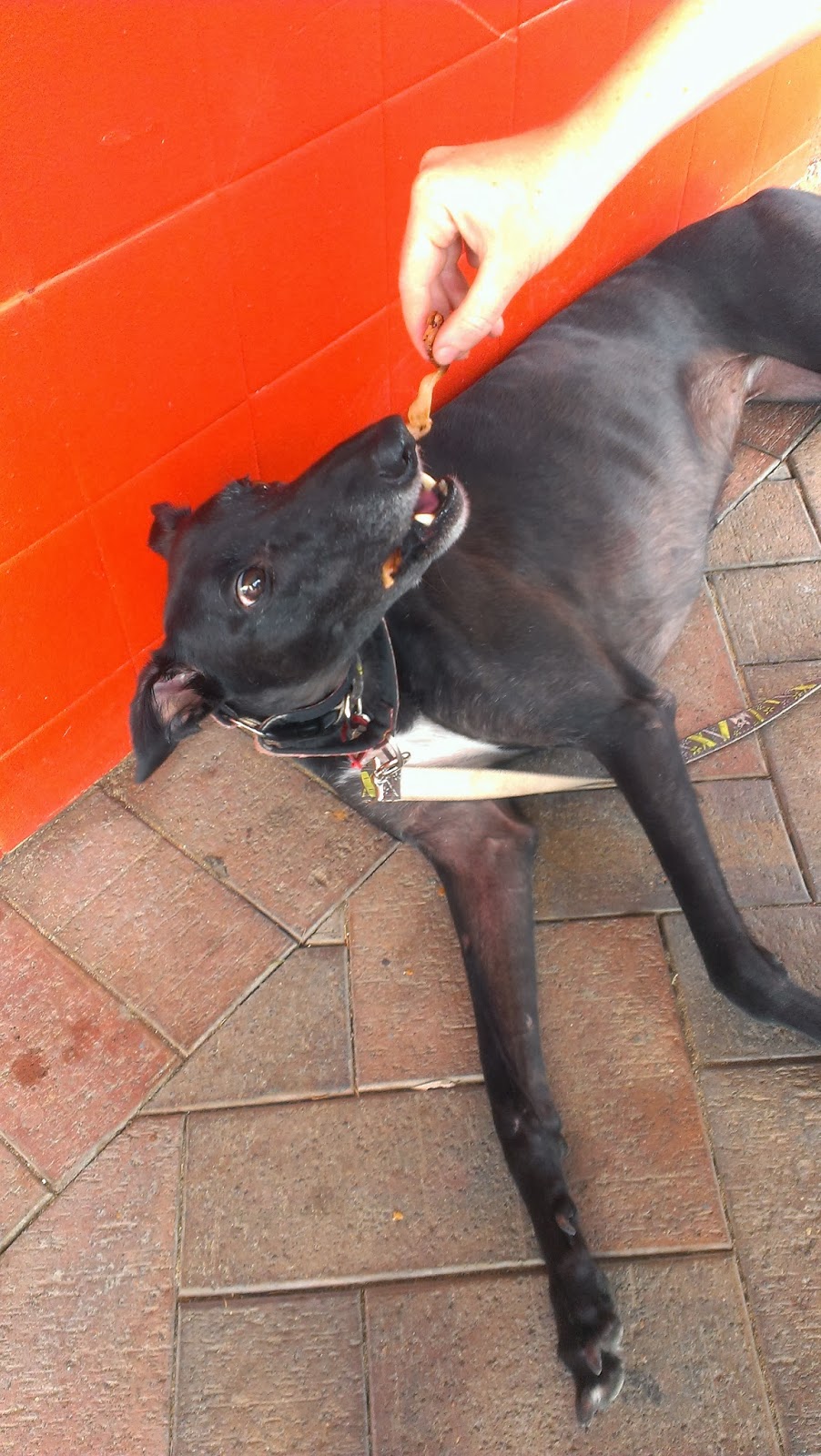 Barbie quite liked this cafe as there was plenty of space for her to lie down in the shade out of the way of people walking past. We love the food here, and the service is prompt and friendly. This cafe ranks quite highly and I am sure that it will become a regular haunt of ours.

Human score - 8/10 (being on a fairly exposed street corner which can be windy at times, and is at a bit of a steep angle which effects drinks balancing on the table mean a small markdown from the humans).

Sea Lions = Dogs of the sea

So it's been a long time since I've done a blog entry - almost a month! A lot of stuff has happened - we have had a professional photo shoot with Alex Cearns at Houndstooth Studio, had many dog park visits, doggie dates and adventures. We've been using the bike trailer when it isn't too hot (if it's over 32 degrees C the dogs prefer the mobile refrigerator, i.e. car).

I have not had much time for writing the blog!

Anyway stay tuned as I get some entries together, but in the mean time here is a little video I made of our kayak trip out to Seal Island, in the Shoalwater Islands Marine Park, about an hour South of our house. A young Sea Lion came out to play with us, and he was incredibly cute. Sea Lions are rare and we are so lucky to have them living so close to us!