I didn't get any photos or videos of the beach date because the beach was busy, and so I was busy trying to keep track of Barbie. Barbie didn't really play with Joc, but she did chase Desma's other dog, Swan.

Swan squeaks as she runs and Barbie found this irresistible. Swan is a bit indifferent to other dogs, and she mainly did her own thing while Joc and Barbie took turns chasing her around. Swan also loves to dig at the beach, so I used her as an earth moving machine and got her to dig a moat for a sand castle.

I took the dogs down to my folks place for Christmas. They were both very well behaved. My parents have two dogs, Harry and Nudge, and they all get along pretty well. Barbie even tolerated the other dogs standing on her while she was trying to relax on the floor! I wanted to take them down to the river, but I went kayaking with dad instead, and my mum didn't want to be responsible for them down there. I saw a few crabs in the shallows and wondered if Barbie would see them, and whether she would attempt to catch them. She would probably get pinched!

Anyway, Christmas has been incredibly hot so the dogs haven't been able to do very much. They have been down to the local river a couple of times. Today is a bit cooler and Barbie seems much more comfortable. She's actually sitting on the couch for the first time in 3 days. I think they enjoyed the air conditioning at my parents place.
Posted by jet at 9:47 AM
whooooo
2010-12-28T09:47:00+08:00
jet
barbie|city beach|joc|swan|
Comments

Can I borrow your Greyhound?

Desma, the animal trainer who ran the CGC course that Barbie went on (and the exam was consequently delayed for), has a whippet x stumpy tail cattle dog called Joc. Joc has the best mix of the two for athleticism. At the age of two he is sailing over agility jumps like he has wings.

Anyway he has never met a dog faster than him. During our last few classes I suggested that Barbie and Joc might like to have a good run off leash. Barbie was definitely interested in him but there's not that much room to run at Billy's and there is not much traction on the concrete floors.

So we have set up a doggie date at City Beach on Sunday morning. It will be interesting to see how Joc reacts to being out paced. I'm sure Barbie will rub it in like she usually does. She will run past him, get him to chase, and then burn him off when he looks like catching up! He is quite a bit smaller than her but he has the cattle dog toughness so I'm sure he won't mind a bit of shouldering.

If they enjoy running together we can make it a semi regular thing.

This is Joc doing a jumping trial.

The Beach is Everyone's Favourite Place...

The traffic is two-way, and they have people to use as traffic cones.... 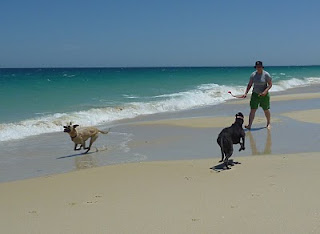 They have each other to play with 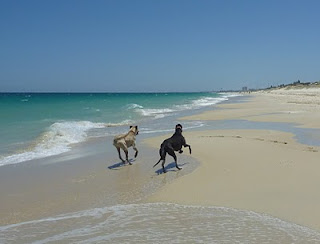 to frolic in the sand... 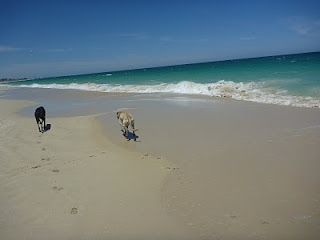 other dogs can eat their dust! 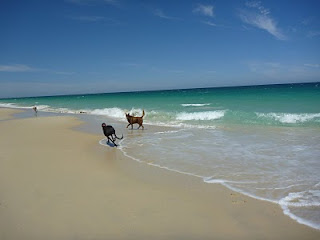 or they can just stand by and watch the awesome speed! 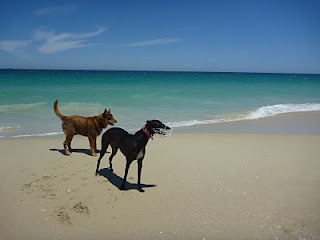 It's time for take off! 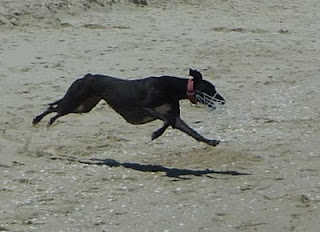 I found my old hard drive and got old videos off. This includes quite a few puppy videos of Bender. I thought you guys would like this one, it was an early indication of the kind of attitude he has!

Blast from the Past - Bender's soccer skills


Here's a one year old Bender showing off his neat soccer skills. I was renting this house with a massive backyard. I think Barbie would have loved it there!
Posted by jet at 8:25 PM
Blast from the Past - Bender's soccer skills
2010-12-08T20:25:00+08:00
jet
bender|dog - silliness|
Comments

I decided to practice driving and filming at the same time. Mittens is curious about the car but hasn't overcome her fear yet. Barbie and Bender both had a go at barking at it but there is no room to really chase it in the house. We will give it a go at the park tomorrow.

In the mean time, here's my new four wheel drive jumping over some bicycles (and you guys can enjoy my Aussie accent, this evening I feel like more of a draaaaawler than usual):

My favorite part about this new toy is the head & tail lights. I had fun driving it randomly up the footpath this evening. I also love the battery pack. The hard plastic wheels don't get much traction on the tiles, so it's kind of hard to control.

I really want to buy a remote control car. I've wanted one since I was a kid, and my brother got to have one but I didn't. My bro's remote control car was cheap and crappy and ate batteries like they were ice cream cake, so I never really got a go driving it.

Anyway, I've seen a lot of footage on youtube of dogs chasing RC cars. I thought that it would be a fun game for Barbie, chasing some kind of off road RC vehicle dressed as a rabbit or towing something that flutters around in the wind.... my little Border Collie x Heeler used to chase one of those micro RC cars in the house. She would flip it over so it couldn't escape. She seemed to enjoy it, even when she wouldn't chase a ball.

The problem is that N doesn't think Barbie will be into it at all. For a car that will realistically have enough top end speed to evade the dog for more than 30 seconds, a significant investment is required. It also has to be electric, as those little nitro engines are too noisy and Barbie will be scared of them!

Then I got to thinking - how much of it is top end speed and how much is the skill of the driver? As long as the car can turn harder than the dog it has a fighting chance, does it not? ;)

Anyway I have decided that I am going to buy a cheapie from Dick Smiths. It just has to be all terrain and have a rechargable battery pack. It also has to look tough enough to take some greyhound pouncing. We have a nice, big flat grass park nearby that isn't very well patronised (and has fences, just in case...) which should be fun for the car and the dog. If she does get into chasing it them maybe I'd upgrade to something faster. If she isn't in to it, I'll give the car to a friend with kids after I've finished thrashing it.