The winter weather has been keeping us away from the beach, but we went for the first time in weeks yesterday. Here's a video of the dogs making new friends. The two little guys were 6 month old kelpie cross staffy pups. They did play a good game of chase with Barbie but I only got her telling one of them off on film. Also, there's a great recall at the end where Barbie had been chasing another dog around and I called her back from quite a distance. Every time she does it I am so proud.

OK, I went out last night and the dogs didn't get their walk, and Barbie was clearly unhappy with the state of affairs. 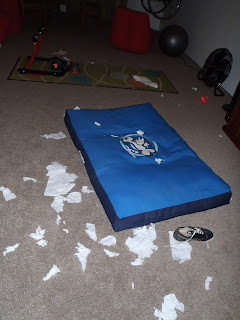 Ever wonder what the furkids do when you are out?

I was very curious about how much time the dogs spend lying in the sun when I go out. I set up my gopro to take one photo every 60 seconds for the two and a half hours I was out riding this morning. I captured a lot of .... action. Sleeping, looking out the window, wandering around a little. Keep an eye out for Bender hiding in the doonah on the couch...

Not sure where the cats were all morning, but when I got home I got a great photo of everyone making the most of the sun! 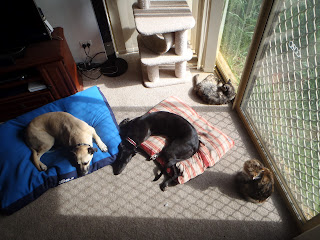 We last went to the Avon Descent kayaking race in 2010, and Barbie and Bender were mainly good companions, though Barbie kept trying to walk backwards when she was sick of standing still. Last year we didn't see the race because we were busy swanning about in Europe. How things have changed with the dogs! 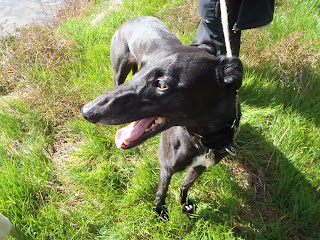 This time Bender was the handful. He just could not calm down. We drove out to Toodyay and he was a pest in the car, while Barbie did her usual thing of sleeping or gazing out of the window.

We found a parking spot and then walked back across the bridge. N wanted to watch from the bridge for a while, but Bender was alternating between looking like he would try to jump off the bridge into the water a long way below, or jumping off the kerb into traffic.

When we got to the other side of the river we found that we couldn't go anywhere along the nice grassy foreshore in Toodyay as they were having an 'International Food Festival', no dogs were allowed. The whole area was fenced off, and we were forced to walk along a road to get down to an unoccupied stretch of river.

Barbie seemed to enjoy the sights and sounds near the river. There was a miniature railway which came rumbling past us on the trail, and she seemed to want to hitch a ride. All of the passengers were smiling at her. Bender had his own things to investigate. 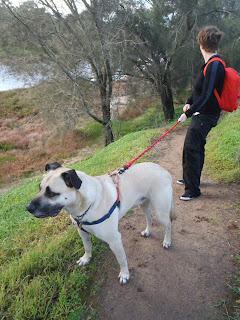 He ended up dragging me down a steep bank, which was slippery mud from the recent rains. I landed on my arm and ended up with a sore shoulder, elbow and wrist. I also hurt my knee on a separate occasion as he tried to drag me to another spot. 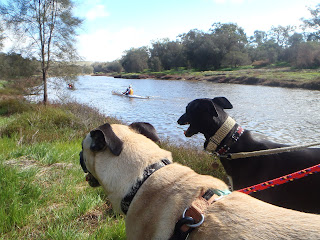 He started to calm down a bit, after I had a very loud whinge at him I think he realised what he had done. 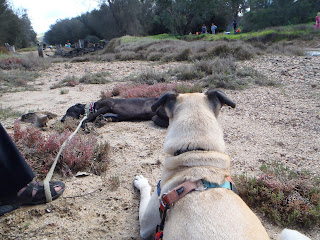 All our camping paid off with Barbie finding a sandy spot to lie down. She didn't sit down at all last time we were in this spot, two years ago! Bender followed suit and we had quite a relaxing time watching the boats paddle past. I did wish I had a pack of frozen peas to put on my elbow though!

There were kids on the other side of the river who had started their own little campfires, and there was quite a lot of smoke. Barbie seems to have gotten over her smoke phobia as she didn't even seem to notice it. 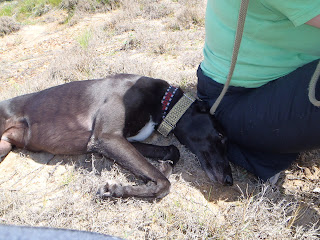 She did notice the sun when it came out though. She decided she would use N's shadow to keep her face out of it. 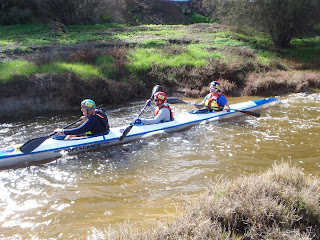 Barbie also asked if we could get this boat, so N and I could be at the front and back to paddle, and her Highness could curl up in the middle hole, rest her chin on the boat, and enjoy the ride.

We found out about the grand opening of City Farmers in Osborne Park via Facebook. Desma and her beautiful Bengal cat, Gunny were going to be there to demonstrate Kongs and there were some good opening discounts. N had her eye on getting another bed for Princess Barbie, and we were after a new leash for Bender, as his is looking very tired. 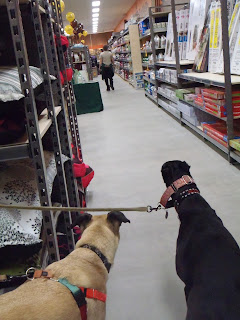 There were a lot of people and other dogs there exploring the store. Gunny was up on the cat tower, surveying the scene very calmly. He is a very striking cat. Both the dogs wanted to stay hello but we respected his space and kept a little distance. 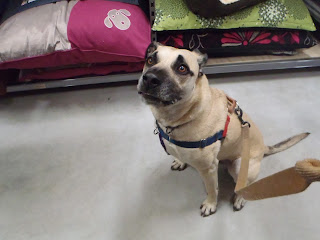 There were treats to be had, and many adoring fans. Bender sat nicely for almost everyone he saw who was wearing a brown shirt in the hope that more chicken jerky would come his way. 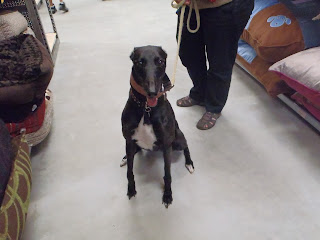 Barbie picked out a bed (that brown one to the left of her), and showed off her sit as well. She also shook hands with a nice City Farmers' man. 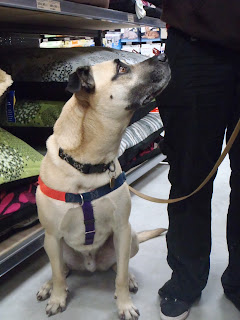 Bender's ruffian side did show itself a couple of times, he managed to hump a young black labrador puppy and it was a struggle to get him off! He also looked like he would mount a couple of others but I managed to stop him. He made a lot of friends though, including an adorable little staffy girl who playbowed to him and tried her best to tangle herself up with his leash. He also attempted to pull me through a set of shelves in order to get to,... well I don't know what. The cheese in my pocket managed to get his attention most of the time. 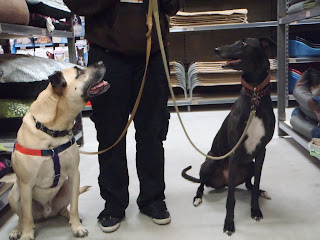 Here is their attempt to be sitting and looking at the camera, but they were too busy stating their case for more treats. 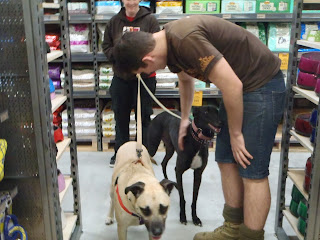 Barbie really does love her adoring fans, look at the smile on her face in this shot! Desma let Bender have a go with a Kong Wobbler that you fill up with treats, and the dog pushes it around the floor so the food falls out. There were some boring little biscuits in the Kong, but Bender knew there was something better in there as well, so he kept pushing it around leaving biscuits everywhere, trying to get the good stuff. Barbie leant a hand and cleaned up the biscuits so that noone else had to.

There were also some snakes and lizards that people were holding. I would have liked to hold one but I didn't want the ruffians to take too much interest in the reptiles.

Right as we were heading out, Bender christened the aisle with it's first poop! It was a massive one too. I think he was too busy barking at the neighbours when I put him outside this morning. The official photographer took many photos of Team BB, but he also took a rather unflattering shot of the poo before I could scoop it up with my poo bag!

We walked out with a bed, pigs ears, a toy for Bender, a leash, and appropriately a pack of poo pickup bags!