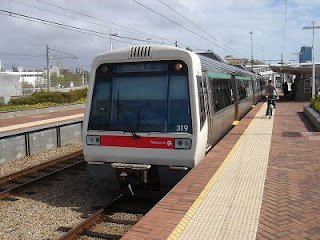 Sometimes on our walks, Ms Barbie gets spooked. When she is spooked, she stares off into the distance and just stops. It's like she goes somewhere else in her head, and she is mostly nonresponsive to verbal encouragement. Usually if I touch her she snaps out of it.

Often I can't see or hear what it is that has spooked her. There is this one corner on the way home where she is often spooked. I haven't figured out what she dislikes about this corner. Sometimes it's seeing people in the shadows of a house nearby.

There is one thing I know that she doesn't like though, and that is trains! Which is a problem because we live perhaps 800 metres from the train line. We have stopped crossing the train line regularly because Barbie hates the trains. Some days are better than others. To date I had been dealing with it by getting her to run. It seems nothing is too scary if we are moving quick enough and she likes it when I pick up the pace a little.

The trainer we are starting with on Saturday, Desma, recommended we go to a distance that Barbie can cope with (though she can be a little wary) and then give her very yummy treats while the train is going past. Now that I have been risking the fine and walk her in the neighbourhood without her muzzle, this is a feasible proposal. I have real trouble giving her treats with her 'cage' on because I have to poke them through the holes, and she tries to 'help' by flicking her head back, which sometimes results in the treat being knocked out of my hand and onto the ground where she can't get it! I am also limited in the kind of treats I can give her - I use the flat dried meat kind so that I can poke it through but I can't really give her chunky bits of cheese or chicken or anything. It just doesn't work!

The trainer has a problem with the muzzle laws too, so that is good. The first couple of sessions are on private property at the daycare place so she told me not to even bring it. I said 'it will be in the car incase we wanna go for a walk...' because I don't know what the City of Belmont rangers are like. I have heard from another greyhound owner that the City of Bayswater rangers don't enforce it.

This also presents issues if I'm going to train her up for obedience and agility and jumping. She would probably be OK doing obedience muzzled but I don't think she's going to appreciate that thing on her face if she's jumping or doing tunnels! If the trials are at public parks though she is legally required to wear that thing. Argh. Well it's all the more evidence for a change in the law, or at least soemthing like a 'green collar program' where GAP greyhounds get tested on their prey responses and general citizenship so that they can win the right to be in public without it.

I mean really for me, privately, it's a calculated risk - $100 fine or not. But if trainers or other organisations are involved I'm not sure it will be so easy.

At the Million Paws Walk there were a helluvalot of GAP dogs, and the Coordinator, Kerry, told us to 'free' our hounds, so we did. Mass civil disobedience unmuzzling all of them. All GAP dogs are certified small-dog-safe before they are adopted out, so she was obviously confident in their testing procedures. And of course, there were no issues despite the hundreds of dogs of all sizes there on the day!
Posted by jet at 11:49 AM

I can't believe they make all Greyhounds wear muzzles! That's just ridiculous! Do all little ankle biters have to wear them, too?

We went through the statue phase with Treat, our first hound. She had the memory of an elephant and if something bad happened ONCE in a place, she remembered it forever! It took a lot of time and patience to work through it, but we did! She loved her walks and would have walked off the end of the planet with me if I'd have kept going.

The only other dog breed that has to wear a muzzle in public is the Pitbull. But they have other restrictions too, which mean that there pretty much aren't any pitties left in Australia. I believe progress is being made in parts of the country, but none so far in Western Australia. As the number of greyhounds as pets continues to grow, hopefully we will have a win on that front. To an extent I am willing to test the boundaries via civil disobedience. The government must get significant revenue from the greyhound racing industry, so I believe there is some leverage that we can exert...

For a country that was founded on the hard work of many dogs, there sure is some prejudice against particular breeds. When I told people I was getting a greyhound everyone trotted out their stories of greyhounds eating cats (who were roaming in public or onto other peoples property!) Mostly they were second, third, fourth hand stories. I didn't even know if half of them were true. I know a couple were and they both involved dogs that did not pass vetting procedures - one involved current racers and one had been rejected by GAP for showing too much aggression towards some young puppies... but the circumstances of that guy were very unfortunate as he was left with an inexperienced foster in a share house with a housemate who left the gate open....

Also, Australia is not as dog-loving as it likes to think it is. Dogs aren't allowed in hotels at all, or on public transport, and basically all of our nature reserves & national parks are off limits to domestic dogs even though the wild dogs, foxes and dingoes are the ones damaging the native fauna.