I realised that I probably need to do an introductory post, in honour of the bloghop! I have had a few new visitors.

So here are the furkids: 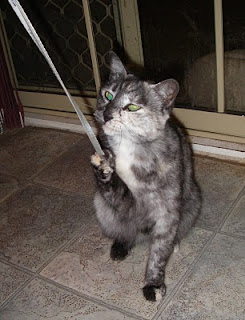 Little Froufrou came from a car wrecking yard in my hometown. My dad was working there at the time, and there were a lot of stray cats there. He had already taken a few home. Frou was born in a wrecked car, her mother a very small and shy tortishell and her dad a large and feral silver tabby. I believe Frou was the only survivor of the litter, and she turned out to be very friendly indeed. She used to beg for scraps from the boys who worked there, and she would sit on my dad's desk and purr. I took her home in anticipation of getting a new puppy and wanting to have them grow up together. She was around 6 months old. When I got her into the house, it totally blew her mind. She didn't know what a roof was! She hid, then she escaped out into the backyard. She hid up a tree for days until she eventually decided to give house life a go.

Froufrou's favorite hobbies are - fighting with her sister Mittens, smooching and cuddling humans, sitting on top of Bender and washing Bender's face for him. Oh and eating. Frou loves eating. She 'sits' on command - she learned to sit the same time I taught Bender. 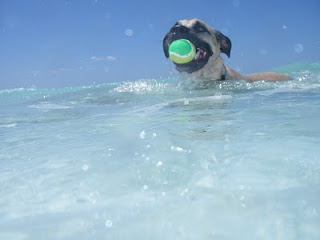 Bender came to me at about 6 weeks old. He was found, along with his siblings, in a rubbish bin, and a friend of mine was bottle feeding them. She really wanted some of them to be 'city dogs' and so when I said I would take him she was overjoyed. I wasn't picky - I didn't meet the puppies. I told her I wanted the biggest boy.

She delivered him to my house and he was so tiny he could share a shoebox with a teddy bear. Now he is 28kgs of pure muscle.

Bender's favorite past time is fetching his ball. He will swim for his ball, and run and jump very hard. He also loves walks and cuddles and having his face washed by Froufrou. 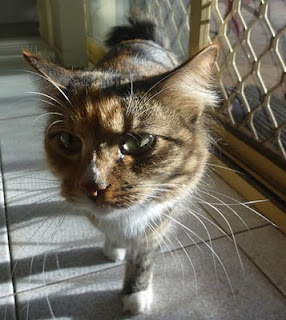 We had been to the local Greyhound track, and got home fairly late. As we walked in the front door I heard a tortured mewing sound. I could not tell if it was a baby or a cat at first, then I realised it was a kitten. I followed the sound in the front yard, and saw her, a tiny, dirty, wet kitten screaming her lungs out. I think she was the runt of the litter and left behind by her mother. I crouched down and called to her and she came running straight to me. We put her in the bathroom with food and water and she cleaned herself up. Little did we know that she has always had great pride in her cleanliness and appearance.

She is a playful and delightful cat, who accepts affection on her own terms.

Her favorite hobbies are attacking Froufrou, sneaking into my bedroom at night for a snuggle, watching people shower, and headbutting the dogs. 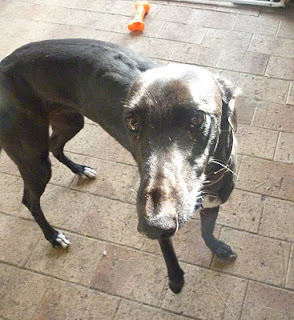 Bender needed a friend, and we had bought a house so there was no more negotiating with landlords about being allowed to have pets. I had always loved greyhounds, so I put in an application to the local Greyhounds as Pets. They sent an email saying that it may be quite a wait until the right dog is found for us, but then a few days later I got a phone call about Barbie. We took Bender up to her foster home for them to meet. I sat down on the dog bed, and Barbie, who was a little unsure of new people, came up behind me and started nuzzling me with her nose. Her foster mother was like 'that'd be right, I feed you and look after you and you go and nuzzle up to a stranger!'

Barbie passed the test of coping with Bender and his limited social skills (he missed out on learning that stuff from his mother), and so we took her home. She was a little over interested in the cats at first, but Mittens is very territorial and quickly put her in her place. Now she gets along really well with the cats although she still won't let Froufrou lick her face!

Two Pitties in the City said...

I liked all the backstories and the fact that all your animals are rescues! We're looking forward to reading more about them.

It was so cool learning about all your pets! How long have you had Barbie? I think she's gorgeous!

Barbie has been with us for 8 months now! It's hard to believe it has been that long. It took her a while to settle in, I mean, it took her at least 4 months to figure out how to get onto the couches! Now she is there all the time, always next to me ;)

I often neglect writing about the kitties but I should give them a bit more airtime. Since they are an important part of the family as well ;)

Nice to meet your fur family! "Hi" from the blog hop!