Frou likes warm bodies. Any new visitors get a Frou installed on their lap within 15 minutes of sitting down on the couch. I am constantly peeling her off me so that I can get up and do things around the house.

She had decided to make use of the dogs when I am not available for cat-warming duties. It used to be that Bender was her favorite doggie to snuggle with, but I think that he had dropped his Kong onto her head too many times.

The 'new' dog definitely got a look in, but that love affair ended when Olive growled at Froufrou for licking her face. Bender loves it, but the greyhounds don't find it as enjoyable. 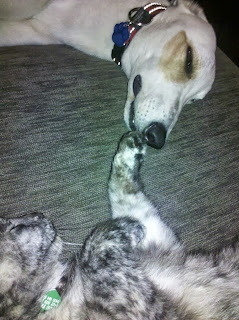 Frou isn't silly, she knows when she is not wanted. Well most of the time anyway! I think she realised that she would get the most cuddle time with the dog who lies down the most - Barbie. She moved on to sharing Barbie's bed with her during the day. 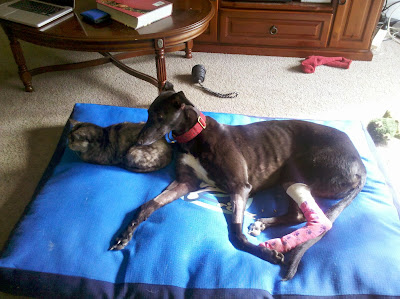 Then she started kicking Barbie in the face when she tried to sleep on the couch at night. Barbie doesn't seem to mind, though she draws the line at face-licking. She will get up and leave if Frou insists on that part of the snuggle ritual. 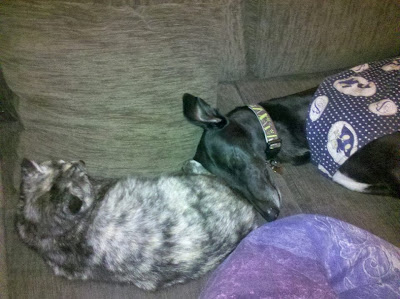